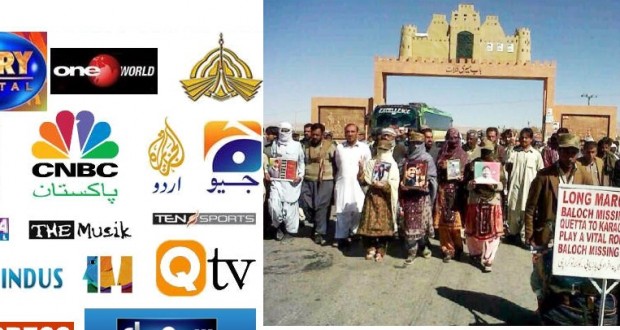 The long  march of Voice for Baloch Missing Persons (VBMP) led by Qadeer Baloch reached its destination after 27 days on 22 November at Karachi press club. This long march was started   on 27 October from Quetta and marched some 730 Kilometers. Notion to launch this long march was to highlight the abductions of Baloch missing persons and their kill and dumps; pressurize authorities for the safe release of enforced disappeared Balochs.

Unfortunately, Voice for Baloch Missing Person’s long march could not gain required coverage in the mainstream media. It was hoped that fifteen year-old Sammi, a 10-year-old Ali Haider, a 70-year –old Mama Qadeer and two dozens of marchers, mainly   women would force policy makers, judiciary, media, human rights activist and Dr Malik’s government to take tangible measures for the safe recovery of Baloch missing person, however, nothing happened special even the Chief Minister of Balochistan   named this Long March as seasonal march.

The leader of long march, Mama Qadeer Baaloch  alleged in his press conference at Karachi press club on 22 November  that he  was pressurized by government and establishment for not launching this protest  and while marching towards their destination they confronted   a number of difficulties, and received death threats on phone calls to stop marching.

According to Qadeer Baloch,   “Since the very beginning media did not cover this long march, when we reached Hub so we were informed that media was threatened and stopped from covering the protest, therefore, they did not come Hub to cover the joining of hundreds of people, except two media organizations.”

Literally, The tacit role of media proved that media is not free regarding human rights issues in Balochistan, to highlight abduct, kill and dump, allegedly by secret state agencies.

“I think the local media deliberately kept silence and ignored the march, just like it has been ignoring the issue of state’s human rights violation in Balochistan for the past several years. For the Baloch people this is not a surprise, I think all of us including Mama Qadeer and the families of the Baloch Missing Persons expected that. But one cannot give up knowing that their father, brother or son is being held and tortured in some dark dungeon.”Said Hina Baloch, a Journalist, and   former 2012-13 Hubert Humphrey Fellow who has completed her professional affiliation with The Brookings Institution’s Center for Universal Education in Washington DC.

In its nature it was one of the unique protests in the history of Balochistan but the silence of media in Pakistan remained questionable.  Mir Muhammad Ali Talpur a senior Baloch columnist who has an association with the Baloch rights movement going back to the early 1970s, shared with this writer, “Had the Pakistani media not ignored it would have been very surprising because the media here is an integral part of the Establishment and it has secured that niche in it due the super-loyal attitude it displays towards the state narrative and state interests.”

“Baloch people do not have any importance in the discourse that the state encourages; it is only the Balochistan resources that are considered to have any importance and get the deserved coverage. The media is supposedly free but it cannot break the mental shackles of ‘Pakistan Ideology’ and the spurious ‘national interest’ that bind it and blind it to the Baloch sufferings. If we still expect any good from state and its paraphernalia which pass off for institutions and its adjunct media then we certainly are living in a fool’s paradise; the media by ignoring the Long March did exactly what was natural for it.” Said Mir Mohammad Ali Talpur

Though, the long march could not gain place in the mainstream media,  Baloch Social   media activists continuously kept reporting the event on social.

Unbelievably, in the last days of Long March eventually international media organizations reported Long March. Some Baloch Journalists and social media activists consider it a good move to highlight Baloch issue internationally. A London  based Baloch Journalist and social media activist Faiz Muhammad Baloch  added, “Social media is a blessing for oppressed Nations, especially for the Baloch nation. The media in Pakistani ignored the Baloch issue from the day one when they started their struggle for ownership of their land  and the international observers and media are not allowed by Pakistan to visit Balochistan. So the only best and useful source available to us is the social media.”

“I think Baloch Social Media activists did a brilliant campaign in their efforts to attract the international media and highlight the VBMP long march. Social media is a tool where we can organize ourselves and bring the plight of Baloch nation to the attention of international community.” Said Faiz Muhammad Baloch.

Yousaf Ajab Baloch is Baloch Journalist and human rights activist. He is author of book “A Battle field for Balochistan”.

Published in The Balochistan Point on November 29, 2013

2013-11-29
admin
Previous: Hope in a forgotten province
Next: Save our Children