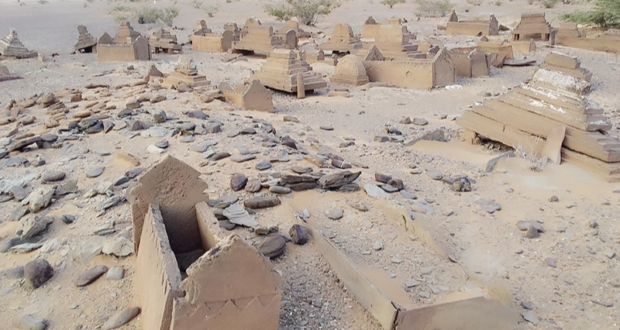 When i feel fatigue from life’s malady then i move for this necropolis while exerting to know and investigate that who would be sleeping eternally in this ancient and historical cemetery?

There exists a hill known as “DAYGAN” by local people in the area of Babbershoor in southwestern of Pasni. The word “DAYGAN” is derived from two Balochi language word, DAY  and GAN. DAY means spectre and GAN means residence, collectively is denoted as residence of sectre. This historical and ancient cemetery lies on the slab and stony area by the frontage of DAYGAN which can be investigated and ascertained in order to ransack the true history and information about the graves and exploring about them is out of local people’s approach. This cemetery is disparated to all graveyards of Pasni due to what its made through delineation. Furthermore, the historical cemetery includes man, woman and child sedates or graves in  distinct designs. It is as regarded about the graves that they could be the graves of Kalmati tribes who relocated in Kalmat during 16th century because historical gazette and magzines viewed that Hammal Jehand had battled against Portugeses in Kalmat which is 70 kilometers far away from pasni in which Hammal Jehand was overcome by Portugueses. Adding more that, Portugueses were pirates who came in coastel of Makhran for lootings who were confronted by the commander Hammal Jehand. According to well-known and notable writer and researcher Dr. Hameed Baloch, the graveyard nearby DAYGAn hill can be burials ground of Kalmati tribes because the Kalmati tribes were residing in pasni by that particular time.

Up to till, the concrete and seems truthful persuasion refers to the graves of Kalmati tribes who were desolating there during 16Th century among the notions and anecdotes which are deemed to be appeared.

Nevertheless, similar cemetery  distinguished as “BAWANI” is discovered in industrial city of Balochistan Hubchoki in adjacent of Karachi in which the writers and historians discuss that The BAWANI cemetery belongs to the Kalmti tribes which probably refers 17th century.

There exists no remains and symptoms in DAYGAN’s area of Pasni which denotes to the residency before 4th and 5th century.

The sandy stones which are shorn in order to make the designs of graves in the DAYGAN’s graveyard  are found in ZARRAIN ”hill which lies in Seirra of SHAMAL-BANDIN hill and adding more that ZARRAIN hill is 60 kilometers far away from pasni. This is quite possible that the stones were brought up from ZARRAIN or SHAMAL BANDIN hill and were shorn in order to design the grave. Furthermore, this signifies that those people were expert in sculpting because the stones are shorn co-integrately through various designs and patterns.

conscious and survived nation protects the remains and symptoms of their culture and civilization for cultural transmissions and consequently the new generations will have the information to the concernings. Furthermore, the graveyard nearby DAYGAN is ancient and historical inheritance which acquires miee researches to be immunized

This blog  was originally written by Zareef Baloch in Urdu and translate in English by KB Baloch.

Published in The Balochistan Point on July 28, 2019

2019-07-28
admin
Previous: Lyari Literary Forum: An upright support for a superstructure
Next: Chiragh Baloch: The first vine actor from Balochistan