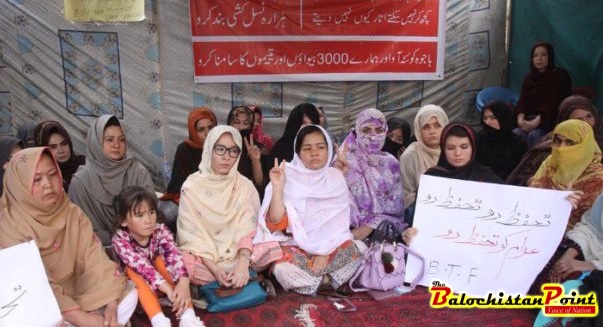 Jalila remains firm with her only demand: “Stop Hazara Genocide” and says to continue her fast unto-death hunger strike until they are not assured by the Chief of Army Staff to provide protection to the Hazara community and end the vicious cycle of Hazara Killings in Quetta. Leading the hunger strike, on Saturday, she was joined by many other women activists as well as sisters, mothers and widows of those who have been targeted.

For the last several years, Hazara and other minorities have fallen victim to targeted killing in Quetta. According to Pakistan’s National Commission for Human Rights (NCHR), more than 509 lives have been claimed in these target killings since 2013.  In the first half of April, hundreds of the community members held a week-long sit in demanding the government to provide protection to them. But their camp was forcibly wrapped up without any results.

The recent hunger camp is increasingly getting the attention of people not only in Quetta and Balochistan but people in many parts of the country are also supporting the demand for protection of the Hazara community. On Saturday, the camp was joined by several Baloch intellectuals as well as members of PSF, BSO and PTM.

Provincial Minister Sarfar Bughti reached at the camp for negotiations, however these negotiations were not fruitful and hence activist Jalila Haidar along with other camp members said to continue the hunger strike until the Chief of Army reaches Quetta.

Published in The Balochistan Point on May 1, 2018