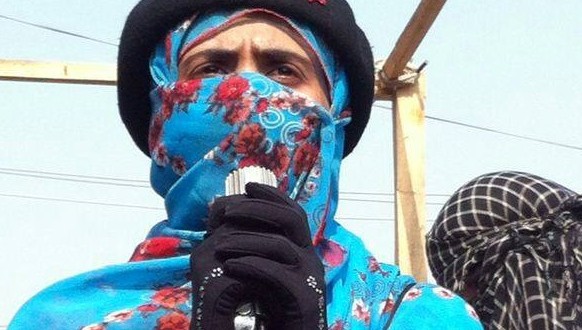 ‘I HAVE LOST MY HEALTH, NOT MY COURAGE’, SAYS FARZANA MAJEED

In Baloch society where women rarely play a role in public life, Farzana Majeed has bucked the trend. She has emerged as a symbol of struggle for Baloch missing persons.

Farzan Majeed (29) is daughter of Baloch nationalist leader, Majeed Bizenjo. Majeed in his youth was a student activist with progressive leanings. After students politics he emerged as an active leader of the Baloch National Movement (Haye). He was assassinated and his assassination was given the colour of a tribal conflict. However, his comrades believe that it was a conspiracy to eliminate him. His radical political views were not tolerated by the authorities.

Farzana holds two MA degrees, one in Biochemistry and the other in Balochi Literature. She had enrolled for M. Phil in Biochemistry, a plan she had to shelve to join the struggle for the recovery of Baloch missing persons when her brother Zakir Majeed went missing.

Zakir Majeed was an active member of the Baloch Students Organization (BSO) and one of the founding members of BSO (Azad). He went missing from Mastung in June 2009 along with his comrades, Abdul Waheed and Abdul Basit. While his comrades were released afterwards, he is missing to this day. Since Zakir’s disappearance, Farzan has been holding protests for his safe release along with other Baloch missing persons. Zakir’s family have also staged sit-ins in front of the Karachi Press Club and the Quetta Press Club.

Farzana isalso secretary general of the Voice for Baloch Missing Persons (VBMP), a body striving for the safe release of abducted Baloch. The VBMP has held a number of protest actions in Quetta, Karachi, Islamabad and host of Baloch towns.

An important action was 1300-day-long peaceful hunger strike which gained attention of the superior judiciary as well as national and international human rights organization.
The historic hunger strike was followed by a long march initiated on 26 October, last year.

In the first phase, Farzana along with a handful of comrades marched to Karachi from Quetta. On reaching Karachi, Farzana told a seminar: ‘I have lost my health but not my courage. The blisters on my feet have not healed but some people have already forgotten us. We are not tired. We have not given up’.

At the time of writing these lines, they are marching on to Islamabad from Karachi. They have already arrived Sahiwal. Along the way, they have received death threats. Meantime, back in Balochistan the families of missing persons continue receiving mutilated and decomposed bodies of their missing members. According to the VBMP, around 18000 Baloch have been abducted by the state security forces since 2000 while 1500 have been extra-judicially killed.

Farzana Majeed, meantime, has inspired a number of Baloch women. She thinks the state is violating the Vienna Convention which protects against torture and enforced disappearances.

‘My brother is a student activist; abducting and torturing him in torture cells for years is against the Islamic principles. It is the ultimate violation of human decency. If he is involved in any sort of illegal activities, he should be produced in the courts,’ she says. She is also critical of country’s mainstream media: ‘The media should be the voice of the victims and report on the atrocities committed against our people; instead they have been pressured into silence by the state’.

Media may ignore her. Her peaceful but determined march—marching on as Viewpoint readers read these lines—is sparking many a imagination in Baluchistan and beyond. Conspiracy of mainstream media silence cannot hide the plight of Baloch missing persons. Every dignified step Farzana takes on her way to Islamabad, teases the silence!

Published in The Balochistan Point on February 7, 2014