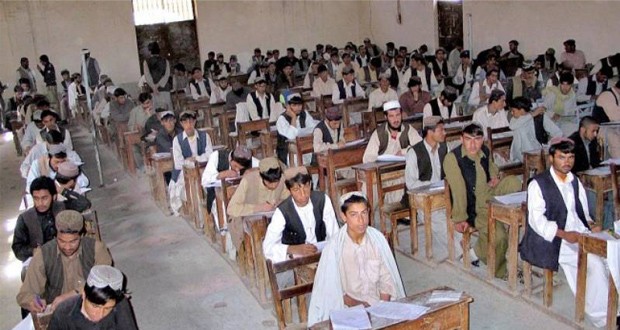 In The Name Of Educational Emergency

According to reports of Educational awareness groups, 2.3 million children are out of school in Balochistan. Literacy rate of the province is a mere 39 percent. In order to increase literacy rate in the province, current government led by Dr. Malik Baloch imposed an educational emergency. Educational budget was increased to 26% of the total budget which is higher than all other provinces. On the face of it all the steps of Balochistan government seem commendable, but a thorough analysis proves that most steps are futile and meant for face saving only.

Matriculation exams commenced in Balochistan from February 18. As a part of educational emergency, government has installed CCTV cameras in examinations halls to thwart cheating. This step was promoted by the government through newspaper advertisements, seminars and awareness walks. Taking steps to stop cheating in exams is a noble effort but that’s not going to solve the problem. Balochistan government thinks that it’s absolved from its duty to improve education in province by installing CCTV cameras in examination halls, which is absurd.

Why do students cheat in the exams, in the first place? The reason is the poor quality of education that they receive. In most schools of the province there are not enough teachers. Where there are teachers, either they are absent most of the time or quality of their teaching is poor. Students have to pass the exams to continue their education and move to the next phase. They have no choice but to cheat in exams. Therefore, cheating is a consequence of poor education system not a cause.

Dr. Malik’s government has virtually done nothing to improve the standard of education throughout the year. No effort was made to curb the influence of Government Teachers Association, which is a union of the teachers that protects ghost teachers. There are thousands of schools without basic facilities and the government is yet to allocate funds for them. On the flipside, the government is extravagantly spending money on CCTV cameras and other fancy means to improve the standard of education.

In January this year Balochistan government launched a website called Education Management Information System (EMIS) to collect and display data about all educational institutes in the province. The launch of the website was promoted in newspapers by spending hefty amounts from taxpayers’ money. The chief minister and his advisor on education both proudly mention EMIS as a revolutionary step. The reality is contrary to their claims because that website is still under construction. It would take another six months before EMIS can become fully functional and the government is already using it for political point scoring. The case of EMIS proves the sincerity of the efforts of the government relating to the educational emergency in the province.

Notwithstanding the claims of the government about good governance, the education sector is marred by corruption and nepotism. The daughter of a provincial minister was promoted in University of Balochistan from Grade 17 to Grade 19, overnight. The principal of the University Law College is a young lawyer who is underage by more than ten years, according to the rules of that job. Personal connections with a political bigwig of the province resulted in this unfair and illegal appointment of the principal. There are serious question marks over the transparency of lecturers’ appointments in University of Balochistan and Balochistan University of Information technology Engineering and Management sciences. These are just few examples of irregularities that are taking place under the watch of Dr. Malik, at a time when educational emergency is imposed in the province.

At a time when the chief minister and his cabinet members were leading rallies against cheating in exams, a land mafia associated with one of the government parties was busy in occupation of a girl’s school in the center of Quetta. The apathy of the government towards protection of the building of schools speaks volumes about the seriousness of the government in improving quality of education in the province.

If the Balochistan government is really sincere in improving the status of education then it needs to get rid of all the corrupt people that are associated with ruling coalition parties. All the illegal appointments made in universities and college based on nepotism should be reversed and the culprits should be punished. After that the government can start taking concrete steps to overhaul the education system.

Frankly speaking, in the current age of information technology, Dr. Malik and his government can’t get away with political stunts like CCTV camera installations in examination halls. Dr. Malik needs to bring his house in order and seriously reprimand his cabinet ministers who are involved in nepotism. If he fails to do this then he will end up being a bigger disappointment as compared to his predecessor, the infamous Nawab Aslam Raisani.

Republished in The Balochistan Point on February 25, 2015

Education 2015-02-25
Editor
Previous: Indifferent To Problems Of Balochistan: Legislators Want Diplomatic Passports
Next: Editorial: Discrimination Against Balochistan In Electricity Supply Should Be Stopped