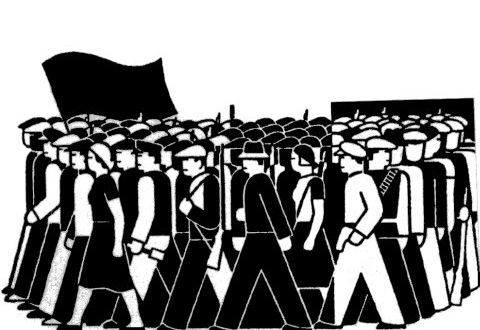 Since the end of Cold War, countless changes have transpired leading to transformation of landscape at global and regional levels. The disintegration of USSR was a huge blow to the leftist discourse throughout the world, weakening extensively revolutionary and anti-status quo passions among the people.

In this sort of society where we live in, it’s thoroughly different and hard to distinguish among vague implications. Society has changed overwhelmingly with the introduction of modern scientific technology. Along with the same measurement, conservatism on both right and left sides has flourished making society more vulnerable to different kind of ideas.

The uncertainty and abruptness of social change is best calculated with the ideas of Karl Marx who first predicted various changes taking place in South Asia with the intrusion of the Raj. However with the passage of time things didn’t shape up according to his ideas and he himself accepted its fiasco. The people may be orienting towards the draconian fields of militancy and terrorism owing to economic reasons. Conversely, the same classes of society are definitely influenced by the notion of religion. All such types of feelings make them provocative and inspire their sentiments with religious injections to wage Jihad against infidels.

Most people often claim that the problems faced by society in the shape of polarization, insecurity, and depoliticization are because of religion. Meanwhile, religion is deemed subversive where people die for it, sacrifice their lives, what happened in 1910s, inter war period, and 1940s, where despite treating religion insignificantly, millions of people were killed in Europe. Did that debacle also occur due to religiosity?

In Pakistan for instance, ethno-nationalist discourses too overwhelm us highly, defining changes on the basis of ethnic discrepancies. In pre-1971 period, where despite the presence of class struggle Bengalis snatched their independence due to their own nationalistic and spirited ambitions. With the separation of East Pakistan Zulfiqar Ali Bhutto highlighted class question consistently and bringing it in practice in the shape of land reforms. In the history of Pakistan it was appreciably a big change but land reforms technically could not relate essentially to the real essence of Socialism.

The slogans of Zulfiqar Ali Bhutto about Islamic Socialism and actual issues of Pakistan at the time were unbalanced. Advent of Baloch nationalism was based not only on class struggle, rather due to their resources being exploited by a specific ethnicity, the same happened with Pashtoons who vertically defined their nationalism via ethno-nationalistic passions.

After the invasion of Afghanistan by Red Army, border lands of FATA, Khyber Pakhtunkhwa and Northern Balochistan paid price for that. At the end of Cold War again the same areas were targeted for expanding strategic depth and later followed by 9/11, same areas took the brunt again. Recently in FATA and other Pashtoon border lands extremism is at the peak, all the areas are epicenter for obtaining foreign policy objectives. In this vague environment so many questions arise: whether state machinery is unable and have failed to eliminate extremist groups or they are complicit? During Cold War if USSR could be thwarted easily why not hundreds of TTP members in Kunar and Nuristan? Last but not the least, on one side Americans fight against Taliban followed by Pakistan Army, again confusion remains everlasting that from where Taliban acquire high-tech weapons and where they find sanctuaries?  These questions need to be answered conclusively to sort out the root cause of conflict in border regions of Afghanistan.

Nevertheless, the class analysis within this society remains relevant but due to dynamic changes in the regional environment, class analysis is becoming baffling with passage of time.

The writer is M.Phil scholar at Quaid-i-Azam University Islamabad.

Published in The Balochistan Point on July 14th, 2014

2014-07-14
Editor
Previous: What Marri stood for
Next: The Ignorance about Balochistan