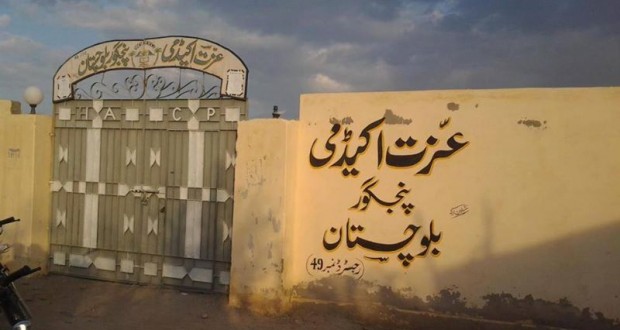 Izzat Academy- Where Does It Stand?

Literature is a field completely separated from politics and if it is involved in politics then it foils the pleasant odor of it unexpectedly. Academies need to toil in enhancement of every field that a literature constituents, if it conveys the slogan of a specific political party then it cannot be called a literary academy whither calling it a ‘’party office’’ doesn’t become a sin.

I remembered Shaheed Saba Dashtayari used to visit a literary group in Panjgur interval by interval and when at the first time I saw him in a home of his colleague was discussing about the activities that a person does engaged with literature and repeatedly the prominent name of ‘’Syed Zahoor Shah Hasshmi’’, ‘’Khair Mohammad Nadvi’’ and ‘’Atta Shad’ were coming. In that time I was a bit unknown about them and their devotees. When I got to receive the Balochi periodicals owing to my elder brother I became fluently nice at reading and writing of Balochi. Monthly ‘’Ulus’’, ‘’Balochi’’ and some others were the books that I used to read as my memory recalls and became aware about some persons and literary activities.

The group which Saba Dashtayari used to visit was the members of the academy we called Izzat Academy. It was formed in 1984 in Panjgur in capital city known as Chitkan. Reverend Haji Qayum and Anyatullah Qoumi served as the president of it. Both were the renowned poets in Balochi and toiled till their last breath and did what they could do. Mullah Izzat himself is another chapter on behalf of whom the academy is named. The story of izzat and Mehrok who we don’t know about, uttered in folk stories of Balochi Being thought in B.A and M.A Balochi curriculum.

Current president of Izzat Academy is Zahoor Zaibi and General Security is Hamza Baloch. In anticipation of this time Izzat Academy has became able to publish just 9 books among which most are the books of poetry. The books it published are as follows,

“Jugr’aye Kapoot’’, this is the Anayat Ullah Quomi’s poetic collection, who was a renowned poet and writer of Balochi literature and his fastidious efforts in enhancement and creating a literary environment is exemplary. His other books include are Dilay’e Tawar’’, ‘’Jalshk’’ published by Izzat academy.  ‘’Hoon o Hushaam’’, this is Saba Dashtaryi’s book published in 1994. ‘’Bachakan Bachakan Gawazi’’, a book was written Wahid Shahkir published in 1998. ‘’Humarain Rushn’’, this is the poetic collection Yuonis Naseer. He is a young poet and his way of arranging the words give them a sense of expression is outstanding.  ‘’Sogind’’ Basheer Shezad’s poetic collection published in 1989. ’’ And ‘’ Panjgur Tahrrekh oh Shaksiayat’’ Khalid Baloch’s book which contains the history of Panjgur and about the personalities of Panjgur.

‘’There is not any fixed fund from side of Govt. and we completely rely upon those ministers belong to Panjgur that they may collaborate with us’’, Stated the current General Secretary of Izzat Academy.

‘’It is registered as accordance with the rules of government but we are not receiving any sort of assistance. The case of the academy has been taken by the CM Dr. Malik Baloch himself we hope he will take it with full consideration and let it stands on its foot’’, Said the member of Academy Zaheer Shah Wafa.

It seems the reason behind its functionless because every time it eyes is feasted upon political tycoon, which in results want their publicity to be rehashed according to their manifesto as they grant fund for it. If an academy become such in perplexities and obligations will never can work appropriately. Same is the case with Izzat Academy by interval of times every that political party backed it that came into ruling government and resultantly the very close workers of them became the president of it.

Saba Dashtaryi has contributed a lot in enhancement of it and his every visit to Panjgur passed away being engaged with literary activities and the members of this disappearing academy. He really wanted to boost off the talents of the literary chunk of people to toil their utmost and bring Izzat academy at a position becomes a symbol of change. Over viewing the activities, publications and programs it conducted is far away to meet the borders of satisfaction. In Balochi literature there hasn’t come a prominent name belongs to Panjgur has earned a glimpse praiseworthy. Academies are of most concerns regarding creation of literary environment paving a way for reading, discussion and collective activities.

Once I visited the academy the books were kept range to 200. Very disheartening it is and a fact of failure for those who claim for books provision to libraries and academies. In Panjgur this is the only institute but negligence has wrapped it up with a scenario none can feel proud of it.

Author is a M.Phil Scholar in University of Balochistan.