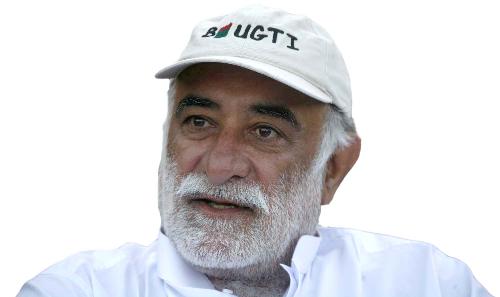 Quetta: Nawabzada Jamil Akbar Bugti, the son of slain Nawab Akbar Bugti, has expressed concern that Anti-Terrorism Judge Nazeer Ahmed Lango was attacked with a bomb yesterday because he had ordered the appearance of Pervez Musharraf before court in next hearing.

In a press statement, Jamil Bugti said that on Monday Nazeer Ahmed Lango rejected the medical certificate of Pervez Musharraf and ordered his presence in court in next hearing. On Tuesday honorable judge attacked was targeted with a bomb blast that killed two and left dozens wounded.

Anyone who will talk for the rights of Balochistan will end up like my father, Nawab Akbar Bugti, claimed Jamil Bugti.

Jamil Bugti criticized the National Party led government for their inaction against the atrocities meted out to the people of Balochistan.

“If the home minister of a province is chief of a death squad then how can people expect peace and protections of life,” alleged Jamil Bugti.

In a strange turn of events, United Baloch Army (UBA) a proscribed militant organization, claimed responsibility for yesterday’s bomb blast. The target of the bomb blast was a police officer not Anti-Terrorism judge claimed UBA spokesman.

2014-11-12
Editor
Previous: Izzat Academy- Where Does It Stand?
Next: IS Visits Militants In Balochistan: Jundullah Spokesman