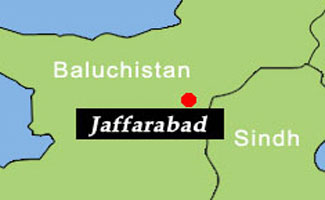 Jaffarabad: 13 people including six alleged militants killed in an exchange of firing.

QUETTA: Over 13 people, including six alleged militants, women and children were killed in an exchange of firing between armed men and security forces, in Jaffarabad district of Balochistan, on Sunday morning.

According to the sources, armed men forcibly entered the local Wadira Ghazi Khan Mahrata Bugti’s house located in Mousiani Goth area of Jaffarabad and opened indiscriminate fire on inmates. Resultantly, seven people of the same family, including that of owner of the house Ghazi Khan Mahrata his wife, brother, sister in law, son and two grenade children were killed.

The security forces backed by Peace Force rushed to the spot after the incident, and surrounded attackers at this a fierce exchange of fire started resulting in death of one Peace Force member and two attackers, sources said.

However, Home Minister Sarfaraz Bugti while confirming the incident said that seven people of Wadera Ghazi Khan Bugti were killed by the militants. “A member of Peace Force and some militants were also killed in gunfire,” he added.

The Frontier Corps (FC) spokesman Khan Wasay in a statement said that more than a dozen militants attacked the Ghazi Khan’s house near Pat Feeder Canal area and killed his all family members.

He said that banned Baloch Republican Army (BRA) had alleged that the family was informer of the security forces.

The deceased were taken to the nearby state run hospital where they were identified as local Wadera Ghazi Khan his wife Sehat Khatoon, son Pahtan Khan, his brother Imam Bakhsh, sister in law Mengal Khatoon, grandson Buhra Khan, granddaughters Aziza and Zarina.

Sources claimed that the Peace Force man namely Chata Bugti was killed but according to FC he is alive but is in an injured condition.