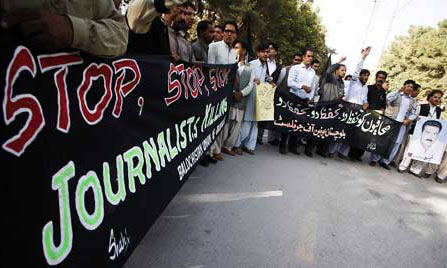 Journalism: A Curse In Balochistan

Razzaq Sarbazi, is a Baloch journalist, documentary film maker, producer and blogger. He has vast experience in the field of journalism. He has extensively written stories, hosted TV shows, made documentaries on history, culture and political issues related to Balochistan.

His works highlighted the vexatious issue of enforced disappearances in Balochistan, which has conjured a severe response for many other journalists working in the fields. The most recent case was the brutal murder of Irshad Mastoi Baloch who was gunned down in broad daylight at his office in Quetta with his trainee journalist and a cashier. We lost Irshad Mastoi because of one single story of injustice he brought for his readers.

Razzaq’s experience as a journalist was no less than a nightmare.  This nightmare followed him and haunted him in his everyday life just because of his work and critical stories. His job not only created problems for himself but for his family as well. Every media outlet he moved, his work was most of the times rejected, mocked or censored.

There was censorship everywhere, most of times he would write stories and nobody could publish it because he was always concerned about the issues which national media paid no heed. Working as a journalist is never easy when you have to be on the field to gather facts for your media outlet if you are in a country like Pakistan then it becomes more difficult because stories come to media after several phases of censorship.

It becomes more difficult and risky when you perform your obligations in conflict ridden areas. The time when journalists report from conflict zones the fear of unexpected nightmares haunt them every now and then. Journalists keep their lives on their palm to break news and bring stories to their readers.

The question of censorship haunts every journalist that why the society has no room for positive criticism and freedom of expression. For journalist like Razzaq the professional obligations have become a crime!

Razzaq’ s political views and his opinions regarding certain issues has always been point of notice. It was questioned time and again. It was the braves of Razzaq who raised the question of Baloch missing persons, their plight in torture cells and the pain through which the families of the victims of the state brutalities were going. It was Razzaq who highlighted the issues facing by the common men by making documentary films, writing blog posts and writing plays. His role in documenting the rein of terror in Lyari and the exploitation of the youth of Lyari by the state sponsored gangs is very prominent.

The country where writing nothing and being silent is freedom of expression then there can never be any room for criticism for the sake of betterment and journalists like Razzaq would always remain under perils.

Razzaq gets calls from unknown numbers. Every journalist in Pakistan knows what happens when one starts getting unwanted calls. Razzaq’s colleagues and office mates Haji Razzaq Sarabazi, Javid Naseer Rind and Razzaq Gul were all assassinated in the line of their duty. One could say a single story of injustice can make the journalist the victim of deadliest fate once he condemned. Today in Pakistan journalism has become a hoodoo for free thinkers like Razzaq and his colleagues.

Razzaq is extremely lucky to not be at home the day people with masked faces, wearing plain clothes raided his home to abduct him extra-judicially. After searching the whole house they abducted Razzaq’s brother and took away all the books, documents and laptops with them.

I mentioned above that Razzaq is a journalist and documentary film-maker and his only crime is his professional obligations.

To write or do not write is a question for every journalist. A journalist writes to clear the scene for his readers, which more often can’t be beautiful because when the bitterness of the truth comes into ugliness, it makes the ugliness more beautiful.

A country where journalists are attacked to suppress the idea of an independent press, one wonders whether there is any freedom or room for press at all. In Balochistan, where there is complete media blackout, what a Journalist like Razzaq is supposed to do? Not report the truth or wait for a bullet? The fact that an individual has to choose between ethical journalism and one’s own life is injustice in true form and the real face of freedom of press in Pakistan.

Published in The Balochistan Point on December 2, 2014