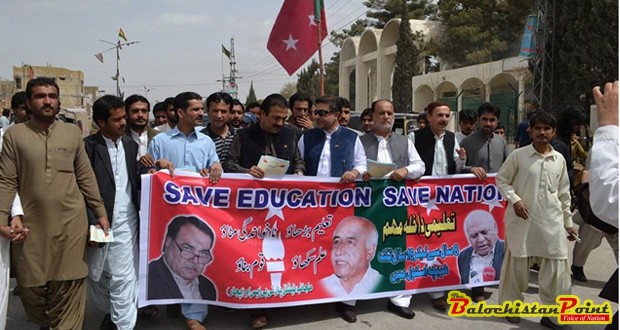 According to the Balochistan ombudsman’s report of 2014, 3rd highest numbers of complaints, 752, were against the education department.  There were 194 complaints from Quetta, followed by Mekran, 156, and Khuzdar, 123.

Chief Minister of Balochistan Dr. Abdul Malik Baloch is spending millions of rupees of taxpayer’s money on personal projection in the form of publicity on the electronic and Print media, publicizing the slogan of “Save Nation, Save Education” to urge people to send their children to school. Number of complaints regarding education department filed with provincial ombudsman proves that Dr. Malik is not taking any concrete action on the ground.

The prevailing conditions of education in the Province are deplorable particularly at primary and intermediate level. The government schools hardly have committed, competent and dedicated teachers.

In rural and murky areas of Balochistan, hopeless students don’t even see their teachers and get to sit in the ramshackle buildings of their schools. Majority of male and female teachers of those areas get salaries while sitting in the provincial Capital Quetta.

Educating the children of Balochistan is the prime responsibility of the Government. It has to eradicate the illiteracy in most backward and affected areas of the province. It can be concluded that Government has failed to change the deplorable status of primary education in the province. Notwithstanding the tall claims, government of Balochistan has miserably failed to ensure that every child has the opportunity to acquire quality education.