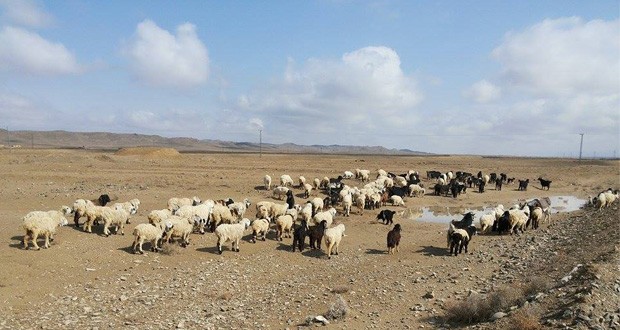 Killi Mehrullah a village of 70 houses in Tehsil Daak of District Noshki presents a hopeful look as the first rain of the season poured down on the dry terrain. But 72 year old Mehrullah, who the village was named after, had reasons to be concerned. “It hasn’t rained in time this year and this downpour is going to be of little help,” he said adding that the sowing season for most crops was over and there was nothing for his cattle to graze on.

Sources within the livestock department confirm that several thousand animals have perished in Noshki district alone making it one of the most severely affected districts from the ongoing drought in Balochistan.

Seasonal rain is the primary source of living for the most of rural Balochistan. According to provincial government’s Irrigation Department more than 50 percent of 2.09 million cultivated hectares are irrigated through Sailaba (flood water) and Khushkaba (rain fed).

“Rain provides us with fodder for the animal and we sow grain and cumin on rain fed farms”, Mehrullah described his only means of living in the harsh terrain of Western Balochistan.

“We have to buy fodder from the city to feed our animals and those who can’t afford it walk farther in search of left over bushes”, said Nazar Muhammad of Killi Saleh Muhammad another village in the area. “Our animals are dying, we are in desperate need of feed and medication”, he said.

According to figures given by the Livestock Department the number of cattle in the district was 600,000 which included goats, sheep, cows and camels. These animals graze on wild bushes and rain fed hay. But a year without rain has exhausted the wild pasturage and nothing could be sowed.

A recent downpour in the area could only settle the dust and fill the cracks of the last 12 dry months. “A few more of these and our animals will have enough to graze on”, said Nazar Muhammad. “But we need to keep them alive until then”, he continued with hope and desperation flickering on his face.

Jahanzeb Mengal Regional Program Manager of Azat Foundation – a local non-governmental organization working in the region said that Daak, Inam bostan and Keshingi are the most affected tehsils of District Noshki from the ongoing drought. “A famine like situation has hit the area”, he said, adding that people were selling their animals in Noshki city for less than half of the normal prices.

A visit to the local animal market proved that right.  A fertile ewe and its one month old lamb were on sale for a negotiable 6000 rupees which would make only one third of the normal price a year earlier.

When asked for the reason of selling the animals so cheap the seller said he couldn’t feed them anymore and they would die of hunger if not sold in the city. The market was crowded with sellers like him with very few buyers roaming around and looking for the healthiest ones in the flock of weak and bonny animals.

An official from the District Administration stated that the assessment of the impacts of drought in Noshki was yet to be finalized. He said that recently transferred Deputy Commissioner was in communication with the Provincial Disaster Management Authority (PDMA) over a relief mission in the wake of drought in the district but his transfer and the awaited allocation of the vacant position has halted the process.

Saif-ur-rehman a representative of PDMA said that directives had been dispatched to the district headquarters for assessment of drought. “We are yet to receive complete information from some districts which includes Noshki”, he said adding that PDMA will be able to proceed only after complete data has been evaluated.

“We are yet to see any response from the government”, said Haji Saeed Baloch a senior journalist and a member of civil society in Noshki. He said that several appeals have been made to the government officials through media and direct visits. “Cattle owners should be provided with dry fodder and medication for their livestock on immediate basis”, he appealed adding that if instant relief was not initiated a humanitarian crisis will unfold.

Chief Minister Balochistan Dr. Abdul Malik Baloch had declared through a press conference in October last year that his government considered the looming drought a serious threat and necessary steps were soon to be set into motion to tackle the crisis. However, with five months already passed people wait for the promise to be realized as drought tightens its grasp with every passing day.