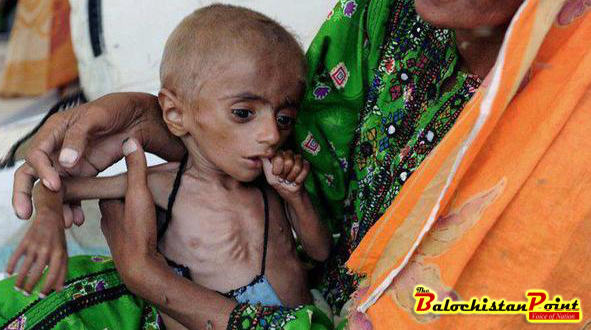 Balochistan is suffering from the risk of malnutrition which is causing deaths among children and women belonging to socially marginalized groups in the province. In 2014, the World Health Organization (WHO) declared emergency in Balochistan in view of the indicators of Global Acute Malnutrition.

According to United Nation Children Fund  (UNICEF) that 16 percent of the children in Balochistan are acute malnourished, 52 percent up to five years age are stunted and 39.6 percent underweight. Apart from this, five million children and around 70 percent of the women in the province are suffering from malnutrition and half of them are being endemic and Vitamin A deficient as suggested by the National Nutrition data.

Balochistan is recorded the highest infant and mother mortality as compare to other provinces just due to malnutrition. The Nutrition Cell with the accompany of WHO and UNICEF has been working just in nine districts of Balochistan total of 32 districts which are totally suffering from malnutrition. But the other districts are left where malnutrition is also growing rapidly. It is only cover 43 percent population, leaving 57 percent helpless and at the mercy of diseases.

It is estimated that the population of these districts are 170,000, but only 35,000 of the population is protected from malnutrition. Mostly the affected people are staying in remote areas as more than 90 percent people reside in remote parts of the districts. The main reason is that the people do not have health care facilities, so they are continuously being affected from malnutrition and dying day by day. Even the children at the age of three years are suffering. Their family’ member do not have any facility to provide them good nutrition to protect their children precious lives.

After Sindh, Balochistan is having the highest level of food insecurity in the country. It is estimated that nearly 63 percent of households in the province are food insecure with 18 percent of them classified as food “insecure with hungry and 11.5 percent as food “insecure with severe hunger “. And none of the district is qualified to be food secure. Although the health authorities has been working to resolve these problems, but the security situation, geography location of the province, scattered population complex the issue of malnutrition manifold.

With the support WFP the provincial government has been supporting the malnourished children, pregnant women and lactating women to prevent stunting and micronutrient deficiencies in the nine districts. Still only 28 percent of the households are reached by LHWs in the province as compare to a national coverage of 83 percent. It is estimated that Balochistan will not improve overnight; it needs billion of multi-sectors issue of malnutrition. Yet the provincial government with the help of WHO and other organizations need to cover the other districts means 57 percent of the population should be covered. Malnutrition is killing the innocent children and women, and causing such deadly diseases that they suffer till their death.

Published in The Balochistan Point on January 4, 2017