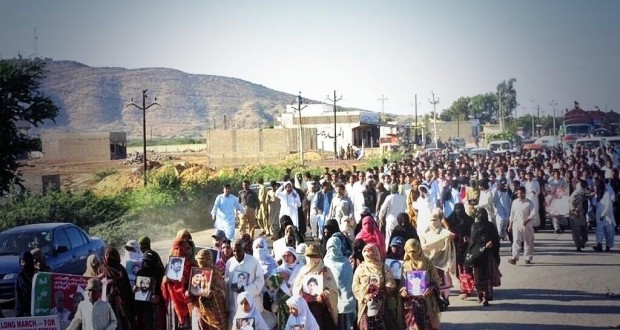 The oppressive systems always forced the oppressed to walk long and long distances either mentally or physically to get justice. For instance, the Salt Satyagrah, the March on Washington, the Long March and the recent Long March by the Voice for  Baloch Missing Persons (VBMP).

Gandhi with his Satyagrahis walked 390-km before he picked up a lump of salt to break a policy of the British government that forced the poor workers to buy their own salt.

The Great March on Washington was one of the historic political rallies for human rights in United States. During this event, Dr King, pushed the text of his prepared speech to the side and jumped from prose to poetry and declared his memorable and moving “I have a dream” speech before a sea of people.

The Long March, an epic flight that covered some 12,000-km (or less by some estimates) by the Three Red Armies of China between 1934 to 1936 was to break through Nationalists enemy lines, when the embattled communists were threatened with extermination by the Nationalists Kumintang, led by Chiang Kai-Shek.

Recently here in Pakistan we witnessed that an unending hope; an overwhelming inner urge and a conviction that stones also melt at times forced fifteen year-old Sammi, a 10-year-old Ali Haider, a 70-year -old Mama Qadeer and two dozens of marchers, mostly women, to walk for twenty and seven consecutive days from Quetta to the once-capital city of Pakistan, karachi to get justice.

On his reaching at Karachi press club, Mama Qadeer determinedly said that if they need to walk to Islamabad and UNO to make their voice be heard, they do. Until their legs carry them, they keep walking to get their loved ones back.

More than 18,000 Baloch have gone missing and more than 750’s mutilated bodies have been dumped. The Baloch political parties, the human rights organizations and even a report of the Supreme Court of Pakistan confirmed the involvement of Pakistani agencies in the disappearances and extra-judicially killings of the Baloch rights activists.

Gandhi’s March cut short the British Empire, the March on Washington brought the African-Americans equal to the Whites and the Red Armies retreat, however, was disastrous in terms of human losses (from Jiangxi, the Red Armies set with an estimated 85,000 troops and when they reached to Shaanxi, they were a mere 7,000) finally defeated the Nationalist forces in 1949. Let’s hope Mama Qadeer’s March brings thousands of Baloch activists out of Pakistani torture cells, though the chances are meager.

Published in The Balochistan Point on November 24, 2013

2013-11-24
admin
Previous: I was pressurized by government and state agencies for not launching long march: Qadeer Baloch
Next: Six killed in Nawabshah accident