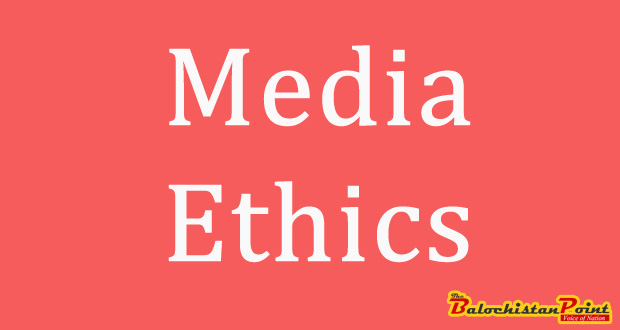 Freedom of media is considered important for democratic societies due to its role of information provider and watchdog. However, more freedom stresses to act more responsibly. In this regard, media ethics acts as important guidelines for journalists to self-regulate their behavior. After the implementation of more liberalized media policy in 2002, media in Pakistan has got more freedom.

In this article, I will analyze the journalism principles, such as coverage, biasness and objectivity, practiced by the print and private television media in Pakistan after liberalization. We find that many gaps exist in actual media practices as compared to ethical behavior. Our findings suggest that the immature private TV news channels and competitive print media sectors lack many basic professional ethics of journalism and needs to improve them to justify their liberalization.

The topic I have selected for my article is regarding the ethical boundaries of Media. The day we live in is the era of Media, as we are familiar with the terms like Media warfare and of course, media is considered as the fourth pillar of State, due to its importance and its role in nation building. There are many aspects which need to be discussed and bring into account, but for me the topics of ethics is of utmost importance. I personally consider ethical values on the top in every aspect and sphere of life, especially when it comes to discuss the issues regarding collective affairs of the society or State. For me, it is injustice to call a society, Social one, which has no ethical values. The nature of human being and standards of Human Beings are based upon the ethical values. The key factor of a good society, in the eye of Religion (Especially in the Eye of Islam) is, of course ethics.

In the era of electronic media, news of a small event spreads in the country in no time. The Media plays an important role in informing the people about the truths. In this regard, journalists collect the information, edit it and finally disseminate it to the general public. Professional ethics, such as what kinds of topics to cover, accuracy, truthfulness, impartiality, fairness and the respect of individual’s privacy, act as important guiding principles for journalists to maintain the integrity of the news content.  However, existing literature has found that the whole process of information propagation to the general public involves different interests such as personal interests of information source or journalist, ownership interests of media organizations, reputation of politicians, agenda of interest groups, policy implications for governments, fame of advertisers’ products, size of the target market and preferences of the audience. And, all these interests spoil the capability of journalists to publish the news content timely, unbiased and in accurate form to the general public. Similarly, some other studies state that, despite the existence of professional ethics in written forms, journalists are often driven by different personality traits to reach a decision when they caught in situations like ethical dilemmas. In this sphere, the factors such as journalists’ education, experience and attitude towards profession can be considered.

Over the last decade, Pakistani media has experienced dramatic changes due to the factors such as liberalized media policy introduced by the government in 2002, technological advancements in media industry, and increased awareness among young individuals due to the increase in literacy rate and university education. As a result of liberalized media policy, many private TV news channels have been licensed. These channels are in head-to-head competition in newly established immature electronic media industry. In addition, broadcast media, by reducing the popularity of print media, has brought main newspapers in intense competition among each other. In this scenario, the immature electronic and competitive print media industry in Pakistan is more vulnerable to unethical professional practices. Further, the Pakistan Electronic Media Regulatory Authority (PEMRA) is planning to adopt a new code of ethics for the media industry. In this situation, it is timely to analyze the current status of ethical practices in Pakistani media industry.

Findings of our study support that although some particular newspapers or television news channels are comparatively better than the others in professional ethics, but overall there exists many gaps. We find that English newspapers are better than their Urdu counterparts with respect to biasness and objectivity. However, these gaps are highest with respect to private TV news channels.

A discussion is about ethics if it entails questions such as “what is good, what is right, or what is virtuous.” Ethical discussions may be about philosophical or applied ethics. Theorizing in philosophical ethics is concerned about purpose, history, theory or nature of ethical concepts and ethical statements. While in applied ethics, it is more concerned about the criteria of right or wrong, and the specific principles about a domain of the society or a profession.

Media ethics is a type of applied ethics. In media ethics discussion, main focus is the analysis and application of relevant ethical principles to the practice of news media. More specifically, media ethics studies the principles that guide the journalists to keep responsible conduct among each other and with the society. Media ethics is concerned about both freedom and independence of media, on one hand, and using this freedom and independence responsibly, on the other hand. In this sense, media ethics stress journalists to use their freedom responsibly and make them accountable for the consequences of their actions on others.

I analyze the journalism ethics as practiced by Pakistan main English and Urdu newspapers and private television news channels. Our findings support that there are gaps as to coverage, biasness, and objectivity. The Dawn newspaper appears best in professional ethics among print media. Overall, English newspapers are more professional than Urdu newspapers. These gaps are highest among private television news channels. Specifically, as to coverage, we found that private television channels have missed many important aspects of the society, while covering many non-important trivial items at the same time. At times, television channels appear biased on important issues rather than be neutral reporters. Big gap prevails regarding objectivity; television channels often practice non-investigative behavior and report matters in more general way that appears misleading sometime. Unconfirmed news is aired to be exclusive that proved wrong later on. Newspapers and TV new channels both have lacked fair representation of all viewpoints. The findings of this study have important implication for media industry of Pakistan.

As, our findings support that Pakistani media lacks in many media ethics that are important for overall society and to justify freedom of media, we suggest to media regulatory authority to implement an explicit code of ethics for media organizations. This code should include clear guidelines as to coverage, biasness, and objectivity of news content, as well as, quality of news reporting.

Further, media regulatory authority should ease restrictions on entry of new media organizations in the industry to foster healthy competition and to end monopolistic competition between few large media houses. Moreover, the authority should take steps to stop mergers and acquisitions, and to disintegrate ownership of media organizations. New entrants will also help curb governmental and corporate pressures by providing more options for broadcasting and advertising.

The need to improve professionalism in the industry underlines the huge need for capacity-building in the journalism sector in terms of professional skills. In this regard, universities can include specific courses on media ethics in undergraduate and graduate studies, on one hand, and media organizations can conduct training programs and professional courses for journalists to make them aware with their responsibilities.

Author is a student of Mass Media in NIPS, Quaid-e-Azam University Islamabad