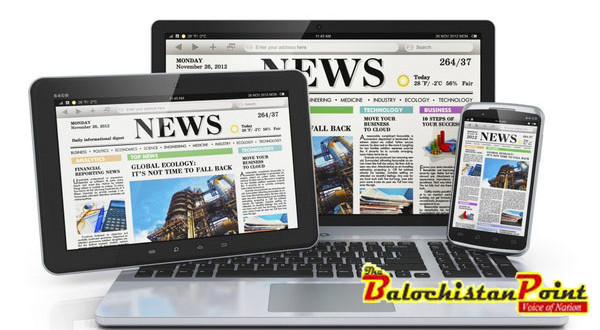 Media: The psychological reason behind disappointment and silence at Baluchistan

Media is the source of expression for the public opinion regarding state and its circumstances. Media freedom has been the sign of well democratic states in the history but Pakistan is ranked 159th in the world regarding it.

Psychologists explain that the  people who are fit and psychologically well, they  express themselves regarding any public issue, however, those who fail to express and do not express themselves are attacked by frustration. They get frustrated in the goal of life oriented which later turns into depression and anxiety.

Media is source of freedom for the public. The province Baluchistan is under the ropes of depression where most of individuals are suppressed and disappointed. The inhabitants of Baluchistan continue their living style, but most of them who are willing to complain but cannot do so, are deeply attacked and frustrated.

Those people who will and talked regarding the issues are threatened not to raise their voices and number of them are still counted in missing persons. Now these are such threats for freedom of expression through media.

I have observed Baloch community youth with very fruitful knowledge but they fail to talk in open places. This is the reason behind youth of Baloch community disappointment and silence. They have been frustrated form a very initiative of Pakistan 1947. It’svery common to see that Baloch people do not participate in the events of pleasure and happiness. They are ever not seen on the paces like tourist points and sports activities.

Being the part of field various times, It has been observed the people never favor to talk freely against bureaucracy and question them. In most of the areas of Baluchistan like Derabugti there is bane over the media channels and all newspapers. It seems a great and huge challenge for the people to talk about the issues.

Finally psychology considers all such personalities frustrated and depressed because they lack the source of expression for their voice where they can claim for their rights and needs. In such areas silence, depression and anxiety havebeen dominant disorders.

An alternate solution to the issue concerned especially for Baloch community is to have an alternate source of expression where they can get expressed themselves regarding what they want to talk about. Rather than keeping knowledge without sharing and expressing. Writing for different issues will stand as psychological well-being of an individual. This alternate source will make them satisfied. It will  be also a kind of contribution towards the nation and soil.

The author is Psychologist. He can be reached at email: asadpashtoon95@gmail.com

Published in The Balochistan Point on January 20, 2017

Disclaimer: Views expressed in this article are those of the writer and The Balochistan Point not necessarily agrees with them