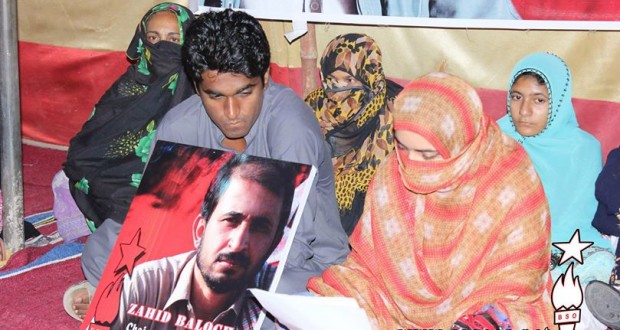 BSO-Azad a Baloch Student Organization believes in democracy and toils in a peace and fair means,  has been confronting  the worst atrocities currently.  The organization has raised a voice for the poverty-stricken people of the wealthy land known as Baluchistan. On daily bases according to VBMP’ chairman a Baloch is being abducted and slain which is utterly against the international laws that demand for the security of the inhabitants dwell in a specific place.

Baloch is deprived of every sort of necessity and the education which is a primary need has been deliberately snatched from Baloch and the books which help in gaining the basic knowledge of life being raided and the institutes where teachers use to instruct the students have been deployed in a hug number of security personnel and turned into army bases.

For Baloch the affluent land of their ancestors is a place to live on thorns and every Baloch who raise a voice to aware the nation in peace and fair undoubtedly soon after go missing or to be slain in the hands of intelligence authorities the same as was the incident happened in Quetta on 18 march 2014. Where nearby the University of   Balochistan, Zahid Baloch Aka Baloch Khan (Chairman BSO Azad) was allegedly abducted in front of his associates including the Senior Vice Chairman Banuk Kareema Baloch.

BSO Azad has playing its crucial role of educating the BALOCH students and toiling hard in the awareness campaign   regarding the rights of Baloch being violated. BSO Azad loves with the books and the pen which  is the only gun to aware the inhabitants about their privileges and it became the dangerous threat for the state so that has abducted the Chairman of this student organization and it is a clear fact every individual who speaks honestly about the Facts concerning with the Baloch issue is in danger as previously the leaders and the members of the organization had been abducted and ended up with the mutilated dump bodies the examples are Sangath Sana Baloch, Kamber Chakar Baloch, Raza Jahabgeer Baloch, Qayum Baloch.

Seeing the atrocities in safe recovery of missing ones has compelled the Baloch to embark upon a grueling March on foot from Quetta to Karachi and to Islamabad. Even though, the request has been submitted to the UN office in Islamabad but yet the smell of positivity in safe release of the abducted ones is a far-fetched. International organization and the international court for justice has not yet given a positive response towards it which is a gigantic human right violation by Pakistan.

The ways to sacrifice own self   as not taking a soul of another if it is a sin. Subsequently, it has been accepted by the CC member of BSO Azad Lateef Johar to sit on the hunger camp till death in Karachi, if the missing Chairman of his organization is not surfaced. Lateef Johar in his interview with BBC has declared it is a fair way of protesting but this will not be tolerated by the intelligence authorities and they will abduct him as like the honored Chairman but it really doesn’t matter how much he is in danger and this he will be profoundly feeling happy as he is sacrificing his life against the tyrannies for the future of tens of thousands students whose rights are being desecrated same like the Baloch.

There have passed five days of the hunger camp from BSO-azad in Karachi. The media to cover the demonstration has kept silence and the international committee is seemed have taken a sworn to not take prompt action over the brutalities the Baloch is facing. It is really disheartening and disgusting and the response from western is voyaging in the same boat. BSO-azad’s hunger camp for safe recovery of Zahid Baloch needs everybody’s concentration and solidarity and the international organizations are being repeatedly requested to take a prompt action over it by the central spokesman   of the organization and now the time came how they response to it for safe release of the chairman, Zahid Baloch Aka Baloch Khan.