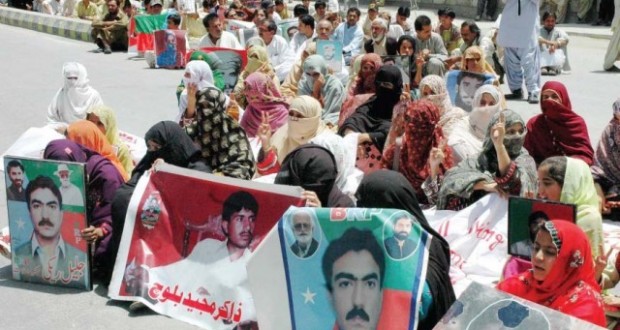 Prime Minister Nawaz Sharif inaugurated Quaid-e-Azam residency at Ziarat on the Birth day of Pakistan – 14 August. This historical place was destroyed and responsibility claimed by Baloch insurgents group in 2013. Likewise, Balochistan faces insurgency in West, South and East. In the same way, unequivocal issue of missing person has also garbled the provincial government by different ways, since the mass graveyard of dumped bodies and bullet riddled bodies of Baloch youths have found in remote areas of the province.

Similarly, Federal government, under the domain of National Crisis Management Cell (NCMC), now which has entrenched into National Counter Terrorism Authority (NACTA): had established a commission comprised of higher, reputable Supreme Court judges to quest the missing persons and to investigate the matter under the realm of constitution. Astonishingly, the lifeless commission couldn’t examine the gloomy issue of disappeared persons under the strong opposition of security apparatus which have unlimited influence in the province. Was it not the fiasco of democratic government, and Supreme Court to tackle the conundrum of missing person under the domain of Islamic constitution? Surprisingly, the statement of provincial home department and Commission report further disseminated the great concern among poignant people. Once, Home Minister Sarfraz Bugti has blatantly ignored the claim of Voice of Baloch Missing Persons (VBMP) which had alleged that, the security forces are involved for the disappearances of Baloch youths in the province.

Regrettably, Balochistan’s newly-elected government is following the path taken by the former government to sideline the hot issue. A couple of days before, the provincial government has decided to not reveal the the secretive “Tutak” mass grave commission report into public. The great concern over the report is, it might irritate the masses about lax policies of the democratic government. Moving to apathetic way, state institutions have given prevalence of power to law enforcement agencies to hinder, quash the insurgency by hard power. In spite of this, the strong and ineffectual measures taken by security forces further disillusion the Baloch’s concern over the state policy towards them. Insurgency and counter insurgency game in full swing in west southern Balochistan, which tends to be very hard time for the inhabitants of the soil.

More ironically, a countless number of Baloch youth, students, teacher, and intellectual are still missing, is that furthering Baloch anger, and trust deficit towards the Center. According to VBMP, all those who are allegedly abducted by security forces have no links with any outlawed organization. Coincidently, the issue have scattered the affected people more psychologically distraught and demanding to the Government, if any individual is involved in unconstitutional activities, the action should be taken against them according to the rule of law rather than concentrating and adopting the flagrant actions against them. Moreover, these sorts of un-lawful measures have portrayed the sinister image of states not only at societal level but at national level as well.

Government has massive responsibility to implement the rule of law in least developed province, instead of looking forward to establishing fruitless commission for solving the matter. At initial stages, the growing issue could be exterminated, if there were vigilant mechanism among the state institution to check their constitutional jurisdiction. Now, it seems that there is hierarchal power competition among the institutions and lack of coordination among themselves as Commission of Supreme Court as well pointed out.

As minimum, the newly elected democratic government must have to establish an independent, transparent and objective mechanism to ascertain the responsible stakeholder. In this perspective, there are some crucial recommendations, regarding the alarming issue of missing persons of Balochistan. First, either Federal or Provincial governments should provide the justice to those families who have been affected. Second, government should treat the culprits according to rule of law rather than making them disappeared persons. Third, State institutions have no prerogative to abduct any felon without substantial proof. Fourth, if any culprit is found guilty of any criminal activity, then He should be brought in High court. Fifth, the government should establish another Full fledge commission including the members of civil society, political parties and the representative of VBMPP to find out the final solution of matter.

It is significant that, the democratic government has potential to reduce the crisis of missing persons through different strategies, as mentioned above. Likewise, as the insurgency on its peak and turbulent situation of province has already threatened the writ of Government in different ways. In this perspective, it is more important, that state must ensure that it would never let any institution to cross the line of law and would follow the direction of constitution and abstain from the using coercion against its own citizen.

Author is a student of Quaid-e-Azam University, Islamabad

Published in The Balochistan Point on August 17, 2014.