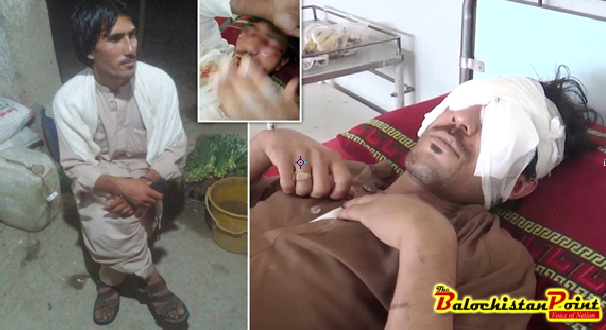 DUKKI: How a young man turned blind for wanting to marry the girl of his choice

“To love is to receive a glimpse of heaven” as said by Karen Sunde. Even if it is the 21st century yet most of the parts of world still lack in adjusting their mind set with those of today’s generation. Especially in all of those areas where tribal systems and cultures still prevail at extremes, it gets really hard to do something out of the box there.

Abdul Baqi who is a resident of Dukki (a city in the province of Baluchistan) and is 22, became a victim to a gruesome and melancholic act just because of his yearn to marry the girl whom he loved. Abdul was on cloud nine as he planned to disclose this matter to his parents last Saturday but little did he know what was about to come his way..

Soon as Abdul Baqi got an approval from the girl’s mother for her hand in marriage, Abdul left their house with great excitement as he now was ready to talk to his parents. Abdul said that as soon as he disclosed the whole case to his father, he did not approve of it but soon after when Abdul left the room with a heavy heart his father who is of 70 years and his four brothers attacked him and they took him into a room with his hands tied up.

He said “I kept asking them that why they are doing this to me and why are they making me suffer”.  As per his words, his mother was also locked up in a separate room so that she couldn’t come to stop the atrocious act that was planned to be carried out. What he stated next gave everyone goose bumps. They tied him to a bed and his father with the help of a spoon took his one eye out and left it there hanging out of its socket. Further when he screamed in pain and begged them to spare his other eye, his father also took that one out and later cut the veins with a knife and left him there bleeding. All of this happened just because he wanted to tie a knot with the girl he loved. Later Abdul was rushed to a hospital in Quetta where doctors said that the boy has been “Blinded for Life” and referred him immediately to Karachi’s Jinnah Post Graduate Medical Centre.

His two brothers are still on the run while his father and the other two brothers have been caught and arrested by the police. His father said that he pleaded me to kill him but I did not because I want Abdul to be an exemplary for the other village boys so that they could refrain from doing such an act in the future.

Marriage is something you just can’t force someone into until unless the person him/herself is willing to do. And even in Islam parents can’t marry their children without their will.  But in case of Abdul no one listened to him. All of his dreams lay there shattered like a mirror. Old traditions like these which end up extirpating someone’s whole life, which put someone’s life on stake need to be left behind and more and more Human Welfare Organizations  along with higher authorities should throw some light on these ill practices and put an end to them by implementing new laws and imposing high fines and punishments.