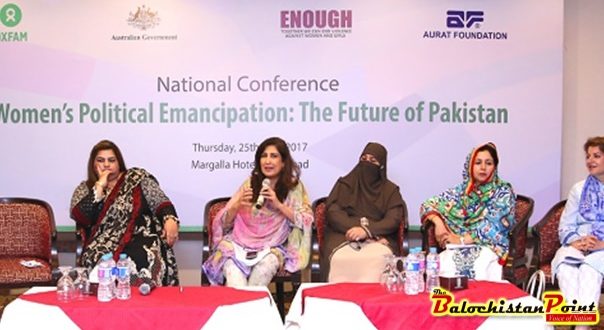 National Conference on Women’s Political Emancipation: The Future of Pakistan

ISLAMABAD: Speakers at a conference on Thursday resolved to ensure women’s meaningful participation in the democratic process as both voters and candidates in the upcoming 2018 elections.

The National Conference on ‘Women’s Political Emancipation: The Future of Pakistan’ was organised by Aurat foundation and Oxfam with support from the Australian Government.  The conference brought together 150 participants which included senior policy makers, members of parliament, judiciary, and provincial ministers and grassroots level women leaders from across Pakistan. Participants deliberated over ways to improve women’s participation as candidates and voters in the 2018 elections and put forth a set of action-oriented recommendations.

The conference is part of LISTEN, a four year project which was implemented between 2013 and 2017, aimed at ensuring women’s political empowerment and their inclusion in policy and decision making processes. The project created a network of 1200 women leaders in 30 districts across Pakistan.

In his opening remarks at the conference, Oxfam Country Director Mohammad Qazilbash said Oxfam believes in building women’s leadership and ensuring their meaningful political participation so they are able to influence the decisions and policies that affect their lives. “All women, including those who are poor and underprivileged have a right to participate in politics. The 2018 election represents an opportunity for us to ensure that all Pakistani women are able to exercise their right to choose their representatives and participate in the democratic process,” he said.

Mr Mirza also demanded that a special parliamentary committee should be formed to ensure implementation of legislation on domestic violence and sexual harassment.”

Discussing the importance of women’s political participation in a democracy, as half of the population, Australian High Commissioner Margaret Adamson noted that Australia’s development partnership with Pakistan was supporting women’s education and economic empowerment.

“Governments and civil society everywhere need to encourage and empower women to contribute to inclusive social and economic development, and to promote security and world peace,” Ms Adamson said.

In the opening session women members of parliament from PML-N, PPP, PTI and JUI discussed electoral reforms which can ensure participation of women and youth in the electoral process.  Pakistan Peoples Party (PPP) MPA Syeda Shehla Raza narrated her struggles as a student activist and said that women face sexism at the highest level as politicians and activists. “But if we stand by the oaths we have taken, nothing can bring us down,” she said.

She said criminalising early marriage in Sindh is a great achievement for the province and the women of Pakistan.

JUI (F) MNA Naeema Kishwar said legislation ensuring political parties give 5% general seat tickets to women will be passed after Ramazan. “In 2018 election results will be computed according to gender so we receive accurate data on women voters’ turnout,” she said.

PML-N MPA Raheela Khadim Hussain said it is not enough that women participate in the 2018 elections as voters but must be brought into mainstream politics as candidates on general seats. “Punjab has made gender mainstreaming a priority,” she said.