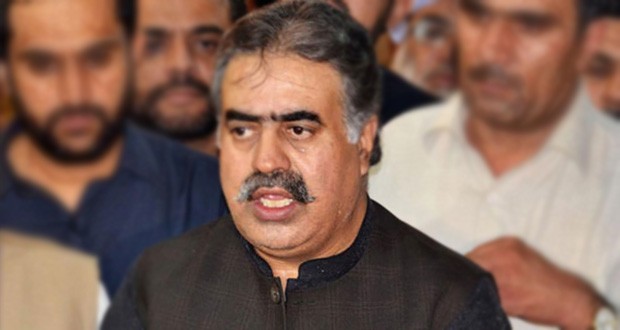 Quetta – President of provincial chapter of PML-N and provincial Minister for Communication and Works (C&W), Nawab Sanaullah Zehri has alleged that National Party (NP) and Pashtoonkhwa Milli Awami Party (PKMAP) are responsible for Horse trading in senate election in Balochistan.

Talking to media persons in Islamabad, Mr. Zehri alleged that NP and PKMAP encouraged wealthy candidates to buy the votes of PML-N members.

“We [PML-N] lost two seats in senate elections in Balochistan due to NP and PKMAP,” lamented provincial chief of PML-N.

He further added that NP and PKMAP left no stone unturned in using government machinery to buy the votes of PML-N.

Referring to Mir Kabir Muhammad Shai, Mr. Zehri said that NP issued a ticket to a contractor who paid millions of rupees to buy the votes of PML-N members.

“We have been sidelined in this government by NP and PKMAP since the day one. We will soon decide about quitting this government,” said an angry Mr. Zehri.

Mr. Usman Kakar, senator-elect and provincial president of PKMAP rejected the allegations of Mr. Zehri. “If PML-N can’t trust its own members of assembly then what’s our fault in that,” said Mr. Kakar.

Chief Minister, Dr. Malik, Balochistan refused to comment when he was asked to respond to the allegations leveled by Mr. Zehri against his government.

PML-N is the majority party in Balochistan assembly but NP and PKMAP have effectively sidelined them form the day one of this government.