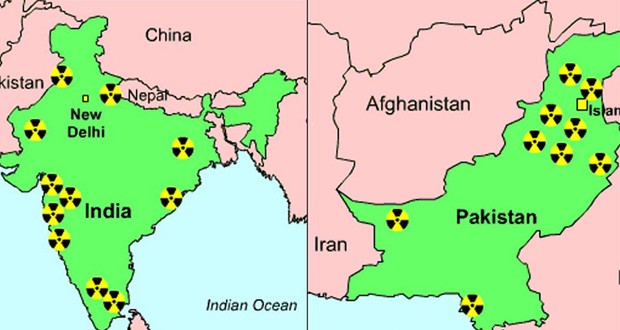 Strategic Stability Of South Asia In The Backdrop Of Nuclear Capabilities

South Asian region is home to well over one fifth of the world’s population, making it both the most populous and the most densely populated geographical region in the world. Comprising of Maldives, Sri Lanka, Bhutan, Nepal, Bangladesh and two arch rivals—India and Pakistan with nuclear capabilities. The region of South Asia has been vulnerable to Indian aggressive policies from epoch and she has had issues with almost every state of the region whether that is territorial issue or water; state sponsored terrorism or illicit covert intervention. India, being a largest democratic state of the world, has fought several wars with Pakistan and of course with China as well in 1962.

The stability of the region since the dismemberment of sub-continent had been manipulated by the offensive military design of Indian forces. India established Tata Institute of Fundamental Research and later they change it to Indian Atomic energy commission. By 1974, Indian tested its first nuclear device and proved the international community that India can develop a nuclear By 1998, India successfully conducted nuclear test and showed the world that we have become a nuclear state and will be next member of nuclear club. Pakistan subsequently responded to Indian tests for its own defense and security.

Now, the strategic stability of the region is directly linked to the two nuclear giants and Indian aggressive contours frequently thrust Pakistan towards conventional and hot wars. But here some questions arise whether Pakistan will go for conventional war or will it opt for nuclear war? Can the two regional states have the potential to survive against pre-emptive strike by its rival or do they afford this costly war? And, is conventional war possible under nuclear umbrella? Looking on all these angels, we can clearly interpret that no one has the capability to meet a devastative pounce of nuclear war. Neither do they have potential to survive against this weapon. However, the possibility of conventional war is also very limited and can lead to nuclear escalation provided that the two arch rivals did not reach an abrupt solution of the problem or international community didn’t intervene immediately.

Moreover, the strategic stability of not only South Asian region but whole international community is relegating after the nuclear dilemma has become a nuclear trilemma and technological weapons have surpassed the nuclear capabilities. These sophisticated innovations include; missile defense, anti-satellite weapons, long-range precision strike systems, cyber weapons and growing tensions in South Asia. These challenges can be a nightmare and much disgusting for strategic stability of the world providing that international community and the two traditional rivals fail to reach an apprehensive deal.

Author is a M.Phil student at National Defense University, Islamabad.

Published in The Balochistan Point on January 4, 2015

Disclaimer: Views and opinions expressed in this article are those of the Author and not necessarily those of The Balochistan Point.