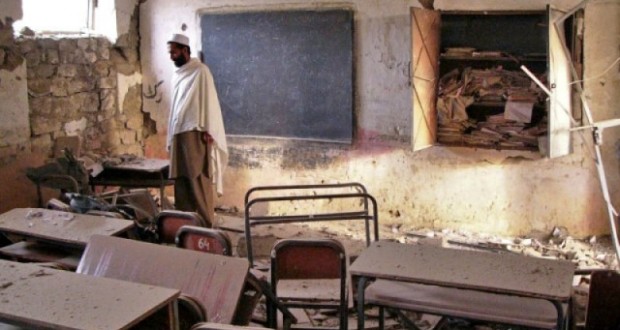 Quetta: According to a News report published in Express Tribune schools in Panjgur are losing students due to terror spread by a religious militant organization.

There are 23 private schools and English language centers and each has lost over 100 students, said Major Hussain, Principal of Oasis High School.

In the month of May, an unknown militant organization, Tanzeem-ul-Islam-ul-Furqan threatened to attack the Private girl’s school. On 13th May, the terrorists of the militant organization attacked a van carrying students of a private school. This led to closure of private schools in Panjgur for three months. On 7th August Schools were reopened in Panjgur after assurances of security by provincial government.

After reopening of schools, the attendance of students reduced to 40%. 400 out of 1025 students turn up in Oasis High School, according to its Principal, Major Hussain.

Despite assurances of provision of security by provincial government, the threats coming from Tanzeem-ul-Islam-ul-Furqan continued unabated. The group sends us daily messages warning us that we will not be spared, added Major Hussain.

Published in The Balochistan Point on August 22, 2014.

2014-08-22
Editor
Previous: Alliance of political parties in the favour of democracy a positive omen: Dr. Malik Baloch
Next: Our MNA is missing