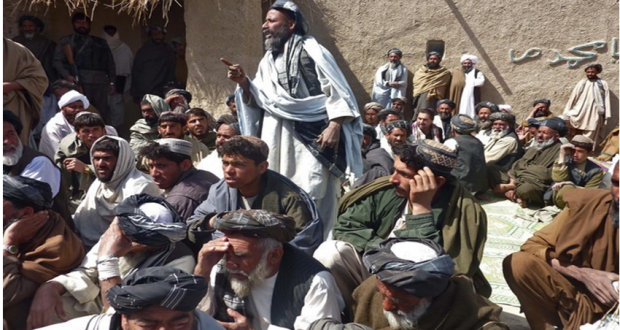 Pashtunwali and Foreign Militants in FATA

The invasion of Afghanistan in 1979 by the red army, did not only bring changes in political and social sphere of Afghanistan but as well as in adjacent tribal areas (FATA), meanwhile it also badly tarnished the notion of Pashutnwali. The invasion by the Red army attracted the fanatical Muslims of the world to Afghanistan in order to wage Jihad or Holy war against the Pro-Communist government and the Red army. The volunteers for Jihad were generally from all over Muslim world but specifically they were Chechen’s, Uzbeks, Tajiks, Arabs and Pakistani’s. These Jihadists were trained and pampered in Pak Afghan border area notably in FATA. The fighters were brought and trained in the area under the direct Pakistani state machinery (ISI), this service made FATA as magnet which attracted large number of people. So this is no more confidential, because Pakistani officials have publically admitted the training and grooming of Taliban’s in FATA. After the accomplishment of scared task these foreign fighters neither voluntarily returned nor were dispatched by Pakistani state to their native countries. As a result these alien fighters along with their families settled in the tribal areas, without the consent of tribal people.

Federally Administered Tribal Areas (FATA) is ethnically dominated by Pashtuns. They live while practicing the primitive code of conduct known as “Pashtunwali”. Pashtunwali is a code of conduct practiced by Pashtuns, where ever they are living in large chunks. Its origin can be traced even before the advent of Islam to Pashtun territories. Pashtunwali basically covers the political, social and economic spheres (dynamic in nature). It talks about equality, peaceful mutual coexistence in a society and how to conduct the affairs in a society.

Now, Pakistani state is in a state of severe turmoil, due to the heinous activities of these foreign fighters. They have flagrantly challenged the state’s writ by targeting security personnel, political leadership, and attacking the government installation. Their primary motives by doing so, is the implementation of their brand of Sharia in Pakistan. Now the common question is that how these foreign militants are living in FATA and why action is not being taken by state against them?

While the questions are answered by our half-baked national intellectuals and writers, which believes that Pashtunwali is the primary cause of harboring or providing shelter to foreign fighters in FATA. Extensive material has been produced by the writers regarding it, Which is very far from the reality .It is all due to lack of knowledge about Pashtunwali, as a result it has been disguised and distorted. So therefore I felt necessary to deconstruct the self-fabricated myths about Pashtunwali.

First of all, refuge and hospitality under Pashtunwali is neither unconditional nor granted to everyone. There are some special terms and conditions for granting it to the seekers. For example in granting refuge to seeker it is necessary to surrender weapon to the host and further to make a promise not to attack enemy as long as he enjoys hospitality. Then under Pashtunwali the host is bind to protect the seeker and grant refuge. Thus the seeker will lose the immunity from hospitality, if he violates the aforementioned terms.

Another most important element is that the writers have once again misguided the readers that Arabs, Chechens and Uzbeks fighters have married the local Pashtun women. So therefore now these fighters are enjoying the patronage of tribal people. They are once again at the opposite pole of the real story. In Pashtunwali women are consider as honor of men, Pashtun people hardly divorced their wife. It is therefore out of question for a Pashtun to tolerate a new partner for his divorced wife. Thus the ratio of divorce in Pashtuns is near to zero. In addition to this the Arabs people are addict of routinely divorcing and marrying. It is part of their culture. So its impossible for a Pashtun to marry his sister or daughter to any Arab, whose culture inverse the Pashtunwali. We can also recite the example from 19th century, where Syed Ahmed ordered the local Pashtun population that their girls should marry his Mujahidins. As this was against their nature, thus the local Pashtuns killed the entire regiment of Arab fighters along with Syed Ahmed.

All the aforementioned arguments justify that that the presence of foreign fighters does not fall within the domain of Pashtunwali. Neither theses fighters have handed over their weapons to the host nor have they given up their cruel activities. In fact these foreign fighters came to the area by force rather than the consent of local people, with their arrival the peace of the area was disturbed. Under Pashtunwali these foreigners were stopped from waging their activities by the tribal elders or Masharan of the area. As a result so far six hundred tribal Masharan has been killed by them. So it would be far better for someone to study the basic tenants of Pashtunwali before discoursing or talking about it.

(This is an excerpt from the M.Phil Dissertation of writer, “Drone Imbroglio in FATA”.)

The writer is Research Fellow at School of Politics at Quaid-i-Azam University Islamabad.

Disclaimer: The views expressed in this article are those of the author, The Balochistan Point not necessarily agrees with them.

2014-07-11
Editor
Previous: Two killed in a firing incident in Kalat
Next: Government Health Dispensary blown up in Kohlu Mawand