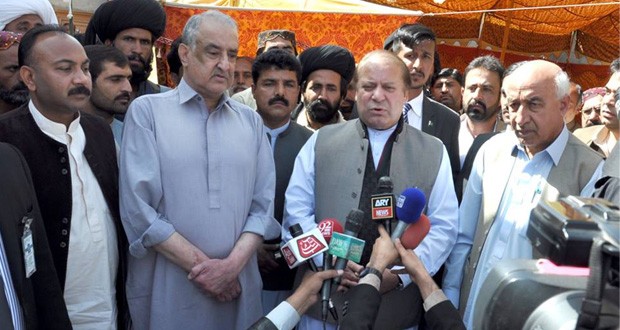 Nawaz Sharif announced Rs. 5 billion for development of Quetta city. These funds would be spent on developing roads, improving sanitation system and cleaning services in the city.

Rs. 30 billion were announced by PM to construct dams in draught-affected districts of Balochistan. PM ordered WAPDA to prepare a feasibility report, along with government of Balochistan, for the dams within 3 months.

PM instructed federal minister of State for Petroleum and natural resources, Jam Kamal, to release additional funds for installation of LPG terminals in 22 districts of Balochistan that don’t have the facility of natural gas.

Dr. Malik Baloch had demanded a package of Rs. 500 Billion for the development of Balochistan last week.

“Development package announced by PM is a laudable effort but there is no guarantee that funds will not be embezzled by corrupt officials and politicians,” an analyst told The Balochistan Point.

“Bureaucratic structure in Balochistan is corrupt to the core and the funds announced by PM would prove to be insufficient due to irregularities and bad governance,” said another analyst.

Published in The Balochistan Point on February 20, 2015