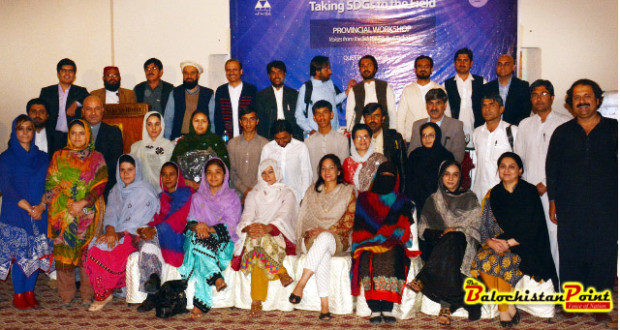 PPAF Organises workshop on ‘Taking SDGs to Field’ in Quetta

Quetta:  The Pakistan Poverty Alleviation Fund conducted the fourth provincial workshop on, ‘Taking SDGs to the Field’, in Quetta. The objective of the workshop was to emphasize the importance of Sustainable Development Goal 5 around achieving gender equality and empowering all women.

This platform allowed participants to discuss ways PPAF and its partners could take forward SDG Goal 5 and to reach an agreement with the field staff to take forward the commitments on inclusion and equity. Field staff and senior management from partner organizations in Balochistan implementing PPAF Program for Poverty Reduction funded by the Italian Development Cooperation, Government of Italy participated in the workshop.

Mr. Meer Mohammed Tareen, Legal Advisor to the speaker of the provincial assembly represented the Balochistan Government and gave the keynote address. He applauded PPAF for creating a platform to discuss the low gender indicators and noted that Balochistan is the first province to have a female speaker in a provincial assembly. Furthermore, since. Ms. Raheela Durrani has assumed responsibility as the speaker, an active dialogue regarding gender empowerment has been present within the assembly. He added that Balochistan was desperate for funding to develop infrastructure, strengthen education programs and improve accessibility to quality health workers and facilities. He said that with the development of infrastructure projects, social mobilization and social awareness, the women of Balochistan will be better empowered. Therefore PPAF and its partners should increase social mobilization which will lead to social awareness of basic rights at the grassroots thus building a social pressure leading to accountability of the government officials and better implementation of government strategies and policies.  Finally, Mr. Tareen said that the civil society needs to represent women’s issues, and in order to do that, women need to voice their concerns and challenges.

Mr. Nadir Gul of the Balochistan Rural Support Program highlighted that natural resource degradation has a direct correlation with the social and economic development of communities which hampered attainment of the MDGs. He mentioned that a collaboration of economic, environment and social integration will be a more effective strategy to improve policies that improve gender empowerment. In addition, Mr. Gul stressed that women are the biggest victims of the water crisis in Balochistan. The expectation from society and the home is for women to gather water for the household, resulting in girls being marked absent from schools. He stressed that social mobilization is an effective tool to help governance and that female economic independence leads to overall empowerment of women and enhances their ability to lead in society and be involved in decision making processes at home.

Mr. Qaiser Jamali, provincial coordinator, UNESCO, quoted ex Chief Minister Dr. Abdul Malik Baloch who outlined that there were 600 ghost schools with 200,000 ghost students. Civil society and Government need to work together to target teacher accountability. He emphasized that out of 12,500 schools in the Province, only 3400 cater to girls. Therefore, he proposed that a joint strategy be developed and implemented that decentralized powers to the district level, created a merit based system for teacher selection, and developed a monitoring system for the operation and attendance of teachers and students.

Pakistan Poverty Alleviation Fund is playing a leading role to ensure equity, inclusion and women’s participation within the organization and amongst the partner organizations. PPAF is committed to bringing empowerment and improving representation of women, poor, youth, minorities, transsexual, migrants, and highly vulnerable individuals or with special needs, insecure and/or any other marginalized community through a transformative framework.

As part of its Gender Action Plan 2015, PPAF held the first national level retreat of social mobilizers/organizers, and credit officers of its POs, following which provincial workshops are being conducted across Pakistan. Social mobilizers are a bridge between PPAF and the communities and bring about a sustainable change in terms of access to resources, behaviour as well as economic condition.  However, bringing about this transformation is not easy, especially, for the women social mobilizers.