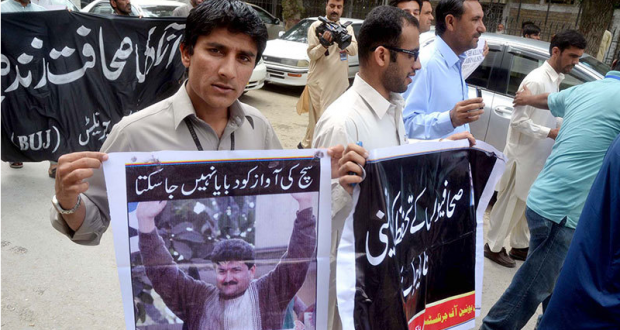 QUETTA: A rally was taken out by Balochistan Union of Jouranalists (BUJ) on the International Day of Freedom of Press in the provincial capital, here on Sunday.

The call for the rally was given by Federal Union of Journalists. Journalists were holding banners and placards inscribed with various slogans. They also chanted slogans in the favour of free media and against the killing and economic exploitation of journalists.

They said that journalists didn’t work on any religious, political or sectarian agenda rather their work aimed at bringing truth to the fore. “Journalists had always been talking of truth and justice and would continue to do so in the future,” the speakers said and added that it was for this reason of adhering to the justice and truth that senior journalist Hamid Mir was targetted for. They also stressed upon the media houses and press institutions to standby their workers and journalists who adhere to the cause of justice and truth and ensure the safeguard of their rights.

They said that the journalists are also being subjected to worst sort of economic exploitation and most of them are working without contracts on nominal salaries. They said that as many as 36 journalists had been subjected to target killing in Balochistan alone but their assailants have not been arrested to date.

They also demanded for compensation for the dependants of the journalists who were injured or lost their lives in the line of duty. They said that it was obligatory upon the institutions to ensure protection to the journalists who are being threatened from all the sides so that they could fulfill their duties rightfully and play their role in the ulitmate reformation of the society.

Published in The Balochistan Point on May 3, 2014

2014-05-03
admin
Previous: EU promises 30m Euros to Balochistan for education sector
Next: What Everybody Ought to Know About Journalists in Balochistan