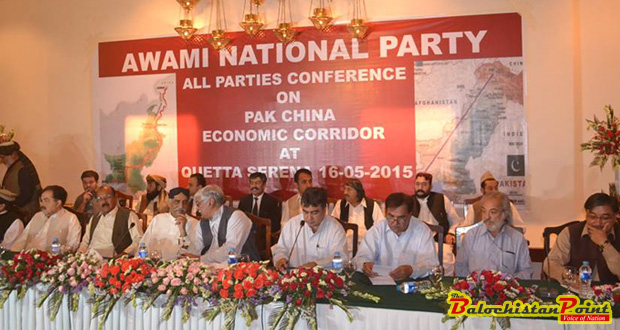 Quetta – President of Awami National Party (ANP) questioned federal government that prosperity of Baloch and Pashtoons not prosperity of entire Pakistan, on Saturday.

Asfandyar Wali was addressing the All Parties Conference (APC) convened in Quetta by ANP to resist efforts to change the alignment of China-Pak Economic Corridor (CPEC).

Asfandyar Wali said that Federal government is making CPEC controversial not ANP or other party.

ANP president demanded from federal government to share information about how profits of Gwadar port would be distributed among Balochistan and federation.

Mr. Wali further said that my grandfather and father have been called traitors and if federal government calls me a traitor for opposing the Punjab-centric alignment of CPEC then I don’t mind.

Opposition leader in National Assembly, Syed Khurshid Shah, concurred with ANP chief and said that its Federal government that is creating hurdles for CPEC not other political parties.

Declaration read at the end of APC; welcomed the visits of Chinese President and aid of China to Pakistan. Declaration also stated that Balochistan has the first right over Gwadar port.

CPEC is a $46 billion economic package provided by Chinese government to Pakistan using different programs. A controversy has arisen when Federal government allegedly attempted to divert the major benefits of CPEC to its support base Punjab.

Published in The Balochistan Point on May 16, 2015