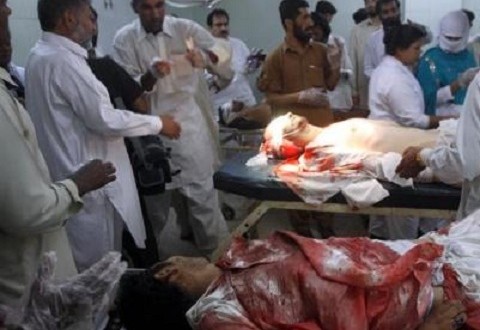 QUETTA:  Thirty-one people killed while over 65 others injured when a suicide bomber blew himself up near an Imam Bargah in Aliabad area of Hazara Town here on Sunday.  Women and children are among the injured and two women have lost their lives in the suicide attack.  Twenty of the injured ones are said to be in critical condition.

According to the sources no one is allowed to enter the crime area. The dead bodies and injured were rushed to Combined Military Hospital (CMH), Bolan Medical Centre and Civil Hospital. The security forces completely cordoned off the area following the high-intensity suicide blast and media persons and members of rescue teams were not being allowed to enter the crime scene.

The attack once again targeted the Hazara Town in Quetta despite presence of heavy security and it is being feared that the death toll could mount. The blast took place near an Imam Bargah followed by firing.

Chief Minister of Balochistan Dr.Abdul Malik  Baloch condemned the blast and directed for security beef-up.  No group has claimed the responsibly yet. Majlis Wahdatul Muslimeen (MWM) has announced three-day mourning across the country while Hazara Democratic Party (HDP) has called a shutter-down strike in Quetta.

2013-06-30
admin
Previous: The flag bearers of justice have restored to a dead silence in Balochistan: BNM
Next: Sorrows of Balochistan