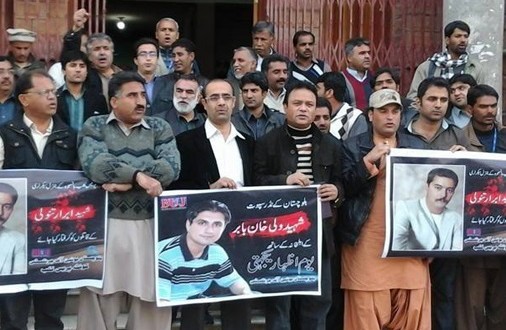 QUETTA: Journalists in Balochistan staged a protest demonstration in Quetta against the killing of their colleague Ibrar Tanoli and others.

The Balochistan Union of Journalists (BUJ) staged a protest in front of the Quetta Press Club. Journalists chanted slogans and carried placards and banners inscribed with their demands. They demanded immediate arrest of killers of Ibarar Tanoli, a journalist of Manshera, and Maneshra Press Club secretary general and the murderers of Wali Khan Baber.

BUJ’s President Irfan Saeed, General Secretary Irshad Mastaoi and press club’s President Razaur Rehman addressed to the protesters. They lamented the murder of their colleague and said that killing of Ibrar Tanoli proved that the extremists are trying to silence the voice of truth. Journalists said that Ibrar Tanoli was murdered in the line of duty because he was reporting the truth.
The Balochistan Point News

Published in the Balochistan Point on March 5, 2014