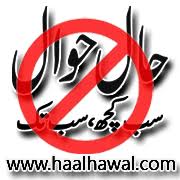 On May 4th, 2018, Haal Hawal, Balochistan first Urdu and Bilingual website was suspended by PTA (Pakistan Telecommunication Authority). Haal Hawal was launched on Press Freedom Day on May 3rd 2016, in the memory of Journalist Irshad Mastoi who was assassinated in August 28th, 2014 while performing his journalism duty in Quetta.

Haal Halwal was introduced by group of friends Shahbir Rakshani, Abid Mir, Habitan Umar and Khalid Mir. The Editorial Polices of the Haal Hawal include giving a better coverage to the issues of Balochistan, encouraging all those thoughts linked with a peaceful, developed & enlightened Balochistan. It also included denial to publish any kind of material that would hurt any religious group, racial or cast group or anything that might go against the constitutional laws.

Haal Hawal completed its two years on May 3rd, 2018 and just after a day of its 2nd anniversary, it faced unusual consequences merely for covering Balochistan’s politics, social dynamics, educational issues and literature.

Haal Hawal’s post on its second anniversary added, “After the completion of one year we introduced sections for the native languages of Balochistan, Balochi and Bharavi. we are now going to introduce English section as well. It’s the first Online News Paper which is publishing four languages in the same time.”

Haalhawal.com team filed an application to PTA to find out the cause for suspending the website

According to a post of the Editor of HaalHawal.com Shabir Rakshani, Haal Hawal is a neutral journalism organization whose team does work under the rules and regulations of Pakistan. He also added, “We have never been unserious neither we have published any post which would be against the establishment nor its institutions, from which Haalhewal.com team would be responsible for any act.

PTA has not responded to the application filed by the team

According to the HaalHawal.com team, they filled an application to PTA, and find out the cause for suspending the website. If there is any objection on our any post then the team should be informed to remove it. However, so far PTA has not responded to the application filed by the team. According to the Constitution of Pakistan Article 19, every citizen shall have the right to freedom of speech and expression, and there shall be freedom of the press.

There are numerous writers especially young writer who contribute for the Haal Hawal on daily basis. Although, there can be some shortcomings but Haal Hawal did not only provide a platform to the young generation of Balochistan to raise their issues but it also was known for its though provoking articles again contributed by young writers.

Disclaimer: Views expressed in this blog are those of the writer and Balochistan Point not necessarily agrees with them.

2018-05-20
Editor
Previous: Haalahwal is still inaccessible
Next: Unending water crisis in the hub of CPEC