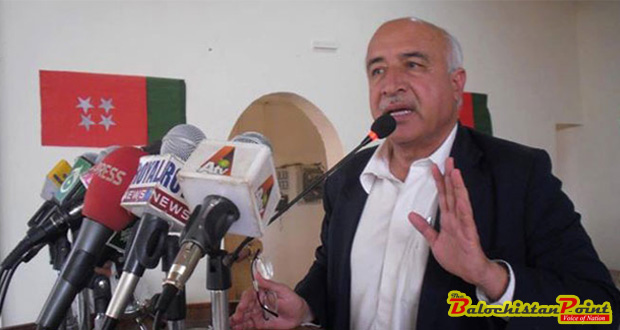 Prime Minister Nawaz Sharif‘s decision to prevent Dr. Malik Baloch from resigning from his post has created speculations among people. This announcement was made on the same day when National Party central president Hasil Bizenjo addressed a press conference accompanied by Dr. Malik Baloch. In that Press conference they have announced to quit the post of Chief Minister (CM) Balochistan and pledged to fully support the proposed CM Nawab Sanaullah Zehri who was nominated by PM Nawaz Sharif under Murree accord, on December 10.

According to reports appeared in local media of Pakistan, PM Nawaz Sharif sent a message to Dr. Malik Baloch through Federal Minister for Railways Khawja Saad Rafique to postpone his resignation until He [Nawaz Sharif] would return to Pakistan. PM is on 2 days visit to Turkmenistan where he would discuss different bilateral issues with his counterparts.

Preventing Dr. Malik Baloch from resigning as CM Balochistan has raised new questions which are being discussed in different ways on social media. Few schools of thought termed it a molested act by invisible actors who don’t want Dr. Malik Baloch to be removed from his seat whereas few others think that PM may have intention to make a comprehensive change like replacing the governor as well.

It’s commonly believed that Dr. Malik Baloch has had good relations with establishment particularly with armed forces officials. Due to these relations retired corps commander and Incumbent National security Advisor (NSA) of PM, General (retired) Nasser Janjua spoke for ten minutes on his farewell ceremony to praise Dr. Malik Baloch’s performance and acknowledged his efforts for restoring peace and security in Balochistan.

There were also a lots of rumors about implementation of Murree accord but eventually PM Nawaz Sharif took a decision and rest of predictions became wrong but the situation once again has became suspicious and the major question is that why PM Nawaz Sharif has postponed resignation of Dr. Malik despite making a decision after comprehensive meetings. Still no clear reason can be fathomed but it might become clear after arrival of PM Nawaz Sharif from Turkmenistan.

Published in The Balochistan Point on December 13, 2015

2015-12-13
Editor
Previous: New CM for Balochistan
Next: Langove Appreciates the Role of PPHI in General and in Kalat Particular