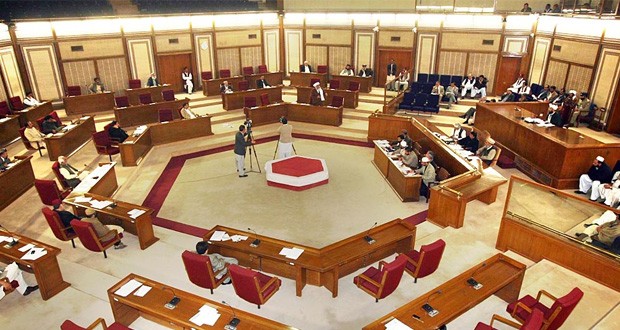 Quetta – According to provisional and unofficial results of senate polls in Balochistan assembly, ruling coalition of PML-N, National Party (NP) and Pashtunkhaw Milli Awami Party (PKMAP) have won 9 out of 12 seats.

Polls for 7 general, 2 technocrats, 2 women and one minority senate seat were conducted in Balochistan assembly.

On two seats for women Gul Bushra from PKMAP and Kalsoom Parveen from PML-N were declared victorious.

On two seats of technocrats Mir Kabir Mohammad Shahi of NP and Agha Shebaz Durrani of PML-N emerged victorious. On the only minority seat, Dr. Ashok Kumar of NP was declared victorious from Balochistan.

Dr. Jehanzeb Jamaldini of BNP clinched an unexpected victory in the elections despite having only 2 members of his party in Balochistan assembly. According to unconfirmed sources, Dr. Jamaldini won due to the votes of disgruntled members of PML-N.

Internal rifts in PML-N due to nomination of Kalsoom Parveen resulted in failure of the party to capture one more seat.

Speaker of Balochistan Assembly, Jan Muhammad Jamali, wanted a PML-N ticked for her daughter Sana Jamali. When PML-N refused her a ticket, she contested elections in independent capacity and lost but divided the PML-N votes.

Contrary to the expectations, senate elections in Balochistan assembly were relatively free from horse trading.

Published in The Balochistan Point on March 5, 2015

Elections Senate 2015-03-05
Editor
Previous: Sayad Zahoor Shah Hashmi: The Man Who Served Balochi Language All His Life
Next: Implementation Of 18th Amendment Is Must For Viability Of Pakistan