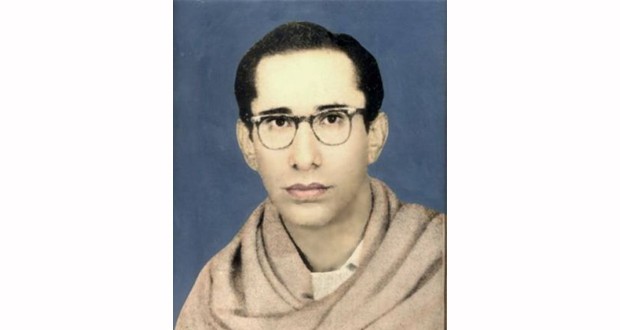 Sayad Zahoor Shah Hashmi: The Man Who Served Balochi Language All His Life

Perhaps the treasure of words for humans, “a language” is the greatest means of communication or to pass on the social, civil, political as well as ideological thoughts of a particular nation. Language and a rich literature are the only way for a nation to survive till centuries. There used to be a time when Balochi was a language that was only spoken but was hardly written though it had vast history that dates back to the prehistoric times.

Having a glance on Balochi Language, we will find out that after the 1950s, many Balochi writers, researchers and linguists commenced their work on Balochi but one of the researchers, who sacrificed his whole life for only his language, was Sayad Zahoor Shah Hashmi.

He was born in the attractive peninsular town Gwadar on 21st April 1926. He completed his primary education from Saeedia School. Along with school his father taught him at home as well. From his early age, his interest towards his education and dedication for writing made a great impact.

In the mean time his social and political struggle in Gwadar carried the movement. later, with the encouragement form a person named Qasim Hoot, Sayad wrote his first serenade named “nagumani chist bant dar kayant oparag mani“. In the coming few years, Sayad’s love for his mother tongue amazed every one. It is said that sometimes, a person dedicates himself to something in such a way that the dedication takes him to the highest peaks of commitment and sacrifices. Syed’s work represents the same dedication and commitment. It won’t be erroneous to say that Sayad revivified Balochi Language.

He travelled to various parts of Balochistan to find out the different words of Balochi used by three dialects of Balochi language known as Makrani, Rakshani and Sulaimani. He found out the ancient words and phrases of which were no more in use. He researched about the common mistakes while writing Balochi and explained some great patterns for Balochi grammar and writing in his famous book “Balochi Syahag-e- rast nibisag“.

Perhaps his greatest effort is the first Balochi dictionary “Sayad Ganj” with thousands of words, their meanings, illustrations, opposites as well as usage. Sayad’s authentic dictionary was published after Sayad’s death from Sayad Hashmi Academy liyari Karachi. Sayad’s lexicography is truly a tremendous treasure for Balochi language that he dedicated to his nation.

The first Balochi novel “Nazuk”, which recently got fame through PTV Bolan as a drama serial is also another literary work of Sayad. Through his novel, he sketched a picture of the people living near the coast and specially the social criteria of life for women in Gwadar in that time. His novel was later translated in Urdu by Ghaos Bakhsh Sabir and published from the Pakistan Academy of Literature, Islamabad.

His poems and serenade had a unique enthusiasm that encouraged the youth for unity and carried the love for his motherland as well as mother tongue, his traditions and Culture. The unprecedented innovative pattern of Balochi poetry that Sayad brought forth increased the beauty of Balochi Literature. Many of his poetry contained the name “Hanul”. No one knows who Hanul was but it’s assumed that Hanul might only be a symbol that Sayad used to represent his homeland. Most of his poetry carried eloquence to motivate the new generation. Some of the lines, from one of his famous poem are as follows:

Through his poem, he encouraged today’s youth to gather efforts for finding new ways of prosperity with brotherhood even if they have to sacrifice their lives to gain that synergy. Today just as Iqbal’s Dua, Syed’s this poem is read at various schools of Balochistan in the morning assemblies.

Sayad also motivated the youth to struggle for the nation and defined the importance of national liberty through his revolutionary poetry. Having great touches of literary devices, Sayad’s poetry contained an affection that made the readers think about social and political situations. His poetry touched the hearts of millions of youngsters. As a poet, author and researchers, he penned all that he saw in his society which made him the author of the most researched books related to Balochi language. Following are some of his published books:

His research, poetry, essays and novels are exceptionally unique contributions to Balochi literature. Syed kept expertise not only in Balochi but also in Arabic, Urdu, Persian, Hindi, Sanskrit and English. He faced barriers and hindrances while working for Balochi literature. Various times, people from other dominant languages victimized and discriminated him, but Syed never gave up. He was indeed always proud of his mother tongue. Sayad’s dream was to see the literature of his language as rich as the other dominant languages of the world.

For his dream, he played his role sufficiently in fact he sacrificed his entire life only for Balochi language. In his short life of fifty-two years, he only lived to write, to struggle and to research. For instance, he lived to serve his nation through his work. In the last few months of his life he suffered from tuberculosis. It was amazing how he continued to write when he was admitted in hospital. In fact, he wrote three of his books in hospital.

4th March 1978 is remembered as the day when Sayad left this world. Today several research institutions are named after him. Some of the greatest examples are the Sayad Zahoor Shah Hashmi Reference Library, Malir Karachi and Sayad Hashmi Academy which was established in Karachi in 1985 but was later shifted to Gwadar. The academy has been successful in publishing numerous books and through the library hundreds of people are still benefiting in the shadow of knowledge. Undoubtedly, Sayad’s extraordinary initiatives have immortalized him in the hearts of millions forever.

Author is a staff writer.

Published in The Balochistan Point on March 4, 2015