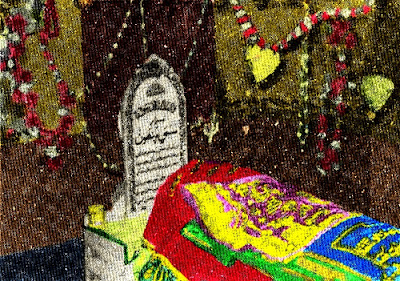 Stories of loving couples like Romeo and Juliet, Shireen and Farhad, Laila and Majnun and many others without doubt are always effervescently remembered and the purity of their love with perpetual sensations of their hearts has gained a legendary prestige in our lives. In addition to that, in the world human beings have always enjoyed all the mesmerizing works of literature like fables, stories, essays, humorous pieces and all that which are masterpieces and surely masterpieces are destined to remain masterpieces but we cannot virtually conceal the fact that real stories of true lovers have priority over fictional tales that are bound within the imaginations and potentialities of the raconteur or the writer.

This story was very celebrated during the Hoth nation a very famous tribe in Kech Makran which is located along the Makran coastal highway in Balochistan. Hoth is actually the name of Mir Jalal Khan’s third son from whom the Hoth nation descended. This story was so famous at that time In Punjab and Sindh people learned it by heart and the poets around there translated it into their own languages. To the exclusion of discombobulation lets throw ourselves into the story by going in the era of the two lovers.

“It was the time when Balochistan went under the name of Swistan because there lived a Raja of Bhambore in Sindh near the Sea. His wife was expectant and she gave birth to a female offspring. The Raja of Bhambore always had a firm belief in Astrology; he called upon his astrologist to predict about what ups and downs his daughter’s luck is going to bear for him. The astrologist said to him that when his daughter reaches the puberty, she would be possessed of a very romantic attitude and the astrologist further said that she was a curse for the royal family’s prestige”.

After hearing the predictive proposition of the astrologist, The Hindu Raja of Bhambore ordered that the child be put in a wooden box and thrown in the Sindhu, the river. It is said that a washer man of the Bhambore village found the box and the child inside it. The box also contained gold and money. The washer man thought it a blessing from the God to receive the baby. He took her home and adopted her because he had no child of his own. She was named Sassi then and got grown as a Muslim. It is said that when she became a young girl, she was as beautiful as the fairies of the heaven. The stories of her pulchritude sprawled all over the Swistan.

It is said that Sassi often saw in her dreams that Punnu is there to come and fetch her up!

Punnu was then the prince of a country. He was a Baloch member of the Hoth tribe in Swisten, the old name of Balochistan. Punnu was often told by his father to get married but Punnu always denied and he said in his country, he couldn’t find any match for him! When the stories of Sassi’s beauty reached Punnu, then he became anxious to see her. He couldn’t abide to wait anymore! The handsome young prince therefore travelled to Bhambore. Whereas Sassi had made a very beautiful garden in front of her house,When the prince came into her country. He wanted to stay in her garden. He along with his camels went there and as he entered the garden he felt rejuvenated. His camels started eating the flowers that Sassi planted them. One of Sassi’s girlfriends informed Sassi that prince Punnu’s camels are destroying her garden!

As Sassi rushed there. The prince was there when they saw each other. They fell in love with each other at first sight. Both were swift off their feet by their uncontroable feelings!

When the prince himself went to Sassi’s father to ask for her hand, her father was dispirited because he wanted her daughter to marry a washer man as he is himself a washer man. But as he saw that they both love each other and then he agreed upon. Both Sassi and Pannu were very happy at that marry-making juncture of their lives. Both got married. The time was passing by very swiftly and on the other side Pannu’s father who was taken aback by seeing no return of his son. He sent his three sons to go and fetch him up.

So, when they went here, they found that Pannu has got married to a washer man’s daughter.  For such a Royal family it was rife with shame to know this. The three brothers said to Punnu to go with them but he constantly denied going with them.

One day the three brothers made Punnu drunk and was be taking him back to his own country.

When the night elapsed. Sassi woke up and realized that Punnu is no more in her village!

Everybody was saying to Sassi that her Husband had betrayed her and he was not going to return.

For sure that time was very distressful for her. But she never saw eye to eye with what people were telling her. Suddenly someone said to her that he saw his husband’s siblings taking him to their country and they were on their way to Kech. She went to search her husband.Everybody dissuaded her from taking such a decision. But she was very stubborn. She ran barefooted toward the Kech Makran. During that she was calling “Punnu, Punnu” with a frog in her throught. She saw a shepherd in the way of Kech and she requested him for some water. He gave her water to drink. But the man was thinking negatively about her.

Sassi soon realized that the shepherd was harassing her. She ran here and there in order to keep herself safe. Sassi couldn’t do anything else. She prayed to the God to keep her reputation safe.

Consequently, where she was standing the land shook and split, she got herself buried in the land!

On the other hand, when Pannu woke from the unconsciousness while realized that his brothers were betaking him to his own country. He jumped off the camel and denied going with them. He ran from there calling ” Sassi, Sassi’. When he was the same shepherd around there, Punnu asked him whether he had seen such a person or not. The shepherd told him that Sassi got buried in the land! When he heard this!

It was like hell for him. He also lamented the same prayer! The land shook and split and Punnu got buried in the land too.

This is a real story of true lovers in Balochistan. The Place where they got buried in the land is now called Lasbela and in this area people often visit their graves.