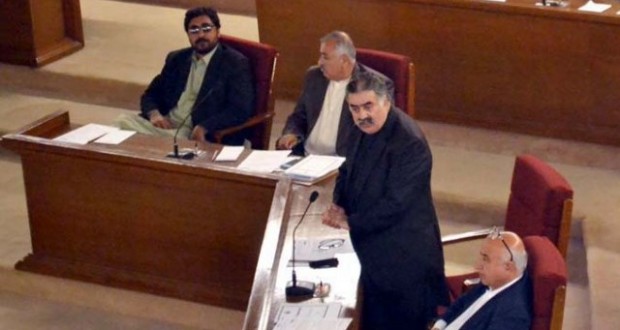 Quetta: Senior Minister Sanaullah Zehri has refuted the claim of Chief Minister (CM) of Balochistan that security situation in the province has improved.

Speaking on the floor of the Balochistan assembly on Saturday, Senior Minster for Communication and Works and provincial chief of PML-N, Sanaullah Zehri said that security situation has worsened during the tenure of incumbent government.

Everyone was shocked when Mr. Zehri said that claims about improvement in security situations are nothing more than “A pack of lies.”

The statement of Senior Minister has come at a point where two coalition partners of Balochistan government PML-N and PML-Q have serious differences with National Party (NP) and Pashtunkhaw Milli Awami Party (PKMAP).

Mr. Zehri threatened to quit Balochistan government if the law and order situation in the province was not improved in near future.

Turning his guns towards the ruling NP, Mr. Zehri lamented “We had given NP opportunity for restoring peace, but it has failed to do so.”

This type of claims have put serious question marks n the credibility of Dr. Malik’s claims about improvement in law and order situation.

“Statement of Sanaullah Zehri has badly exposed the failure of Balochistan government and it has also proved the claims of CM to be unreliable,” said an analyst while talking to The Balochistan Point.

Published in The Balochistan point on November 30, 2014.

2014-11-30
Editor
Previous: Words Of Change: Clearing The Coast For The Women Of Balochistan
Next: Startling Revelation: Afghan Immigrants Involved In Major Crimes But Balochistan Government Has Ignored The Issue