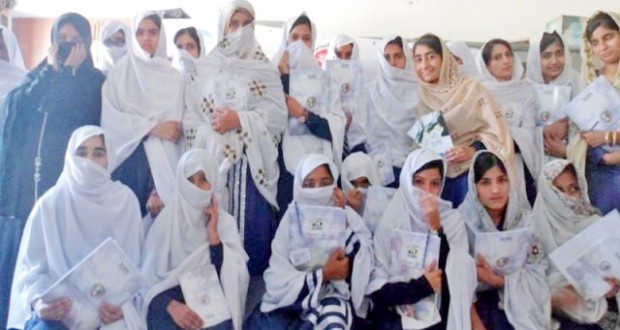 Words Of Change: Clearing The Coast For The Women Of Balochistan

Dressed in a colourful embroidered Balochi dress, 19-year-old Mariyam Suleman is a reflection of the deep blue sea that meets the shore of her hometown of Gwadar. Unassuming yet dynamic, the teenage social activist is making waves by creating awareness about the rights of women.

A college student and blogger, Mariyam is teaching women English in rural areas of Gwadar in order to give them an equal shot at opportunities. Doing what she does, that too in Balochistan–where proper education is a dream, takes unmatched resolve. And Mariyam’s determination, like the waters that besieges her land, is unwavering.

Mariyam started her endeavour after completing her undergraduate education from America. She recently conducted a workshop with the help of a non-profit organisation in Gwadar where over 30 college-going girls discussed women’s rights and swapped stories of influential Baloch women who changed society as they know it.

“I have not done a big thing, but I feel happy to do something for our society, specifically for the women in Balochistan who are denied access to education, not only because of cultural barriers, but also due to lack of resources,” Mariyam tells The Express Tribune.

“I organised a few workshops for college girls in Gwadar and have also been teaching English language along with maintaining my personal blog,” she says in a nonchalant manner that would have you think she is among many doing the same in her area. In fact, Mariyam is one of the first teenage girls to regularly write blogs about education and women issues in the province.

Elaborating on lack of opportunities, Mariyam says cultural barriers are a major issue. “They (girls) are married at a very young age. Sometimes they are forced to stay home rather than encouraged to compete with men out in the world. This is why, at times, they stop dreaming.”

Avenues for girls to pursue an education in Gwadar are extremely limited, even with the attention the coastal city has attracted in the past one decade. “Girls often bury their dreams because of lack of opportunities and cultural barriers.”

Yet, the women of Balochistan are aware of their rights. Mariyam said girls at several workshops have voiced one concern repeatedly: ‘Men should be taught about women’s rights, not women.’

Mariyam Suleman Baloch is also a Staff writer for The Balochistan Point.

Published in The Balochistan Point on November 30, 2014

2014-11-30
Editor
Previous: Book Review: River Is Coming To The Front
Next: Senior Minister Terms The Claims Of Chief Minister Of Balochistan About Security Situation As “Pack Of Lies”