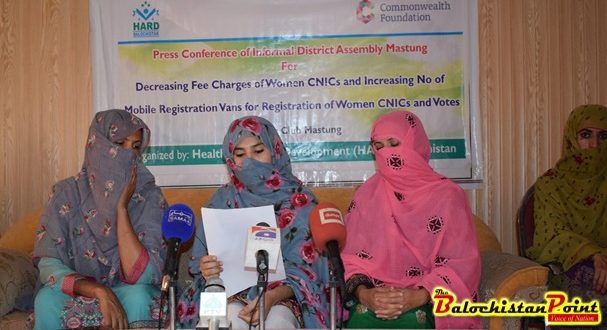 Mastung: Young Women Social Activists from Health And Rural Development (HARD) Balochistan with assistance Commonwealth Foundation have said that the recent increase in CNIC fee is a major obstacle for women to get CNIC, while appearing in a Press Conference in Mastung Press Club Miss Tania Malik, Miss Bakht Bi Bi, Miss Rukhsana Kareem, Miss Pari Gul and Miss Rehmat Khatoon members of Informal District Assembly District Mastung raised the issue and said that the absence of CNIC keeps the women away from election process.

They said: “Political power is strength to bring change in every sphere of life and women of Balochistan, particularly those of Mastung districts have deliberately been deprived of this important power.”

“District Mastung is in the clutch of poverty and illiteracy which embolden the opportunists to exploit the situation in their favour. Almost half of the total population has been ignored politically and no serious efforts have so far been made for the uplift of the women in political domains.” They added.

They said that the majority of the women of both districts lived in far-flung rural areas with destitution conditions and could not afford the heavy fee of NADRA. Similarly, they were not able visit NADRA office and stay in major cities to get CNIC as it falls outside their financial approach.

The activists demanded reinstating the previous fee of CNIC and rather it should me more curtailed for female. They also demanded that the Mobile Van of NADRA should be sent to different far flung areas to give the CNIC facilities to rural women at their thresholds.

The women from HARD Balochistan also expressed disappointment and their dissatisfaction over the attitude of the political parties for ignoring their female political workers and demanded from the leaders of all political parties to create women friendly space and raise women on higher and decision making position in their respective party structures and also play their role for bringing women in politics more and more and prepare women and give them ticket to contest elections on their party’s platform.

Published in The Balochistan Point on July 4, 2018