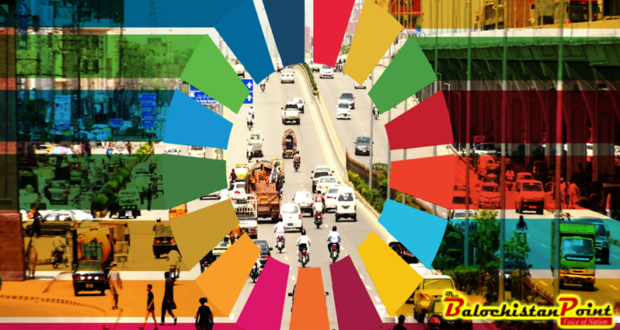 The economy of Balochistan is largely dependent upon livestock, agriculture, fisheries and production of natural gas, coal and minerals. Including Quetta, the infrastructure in the province presents a bleak picture of the development and stands much behind when it is compared to rest of the country. Historically, limited farming in the east as well as fishing along the Arabian sea coastline had been a form of income but due to ‘exclusive NOT inclusive’ recent development in infrastructure these sources of income are also threatened. The benefits due to arrival of CPEC and development of sea port in Gwader are question marks for local communities. The level of confidence of locals on these mega projects is nonexistent. There are also mining activity of copper, gold and other minerals but how much these natural resources have changed the lives of local communities are vague and never calculated in scientific manner, thus invisible and probably fictional.

The situation of social sector in Balochistan is worst in the country and probably in the world. This is embarrassing to showcase the social statistics of the province. Literacy rate in Balochistan is 44% and national average is 60%, Net enrollment rate is only 56% and it keep on decreasing as these statistics move toward higher class. Gender Parity Index for primary education for Balochistan is 0.59 whilst it is 0.86 overall in the country. The situation in health sector also present same disappointing situation i.e., under-5 mortality rate is 111/1000 live births, neonatal mortality rate is 63/1000 live births and maternal mortality rate is 785/100,000 live birth. The proportion of population with access to safe drinking water and sanitation is only 31%, however this proportion is 79% in Punjab, 67% in Sindh and 76% in Khyber Pakhton Khawah. Poverty head counts are the highest in Balochistan. According to Multidimensional Poverty Report published jointly by Planning Commission and UNDP the poverty headcount in Balochistan is 71.2% and in rural Balochistan it is 84.6%. Last but not least, the identity of Baloch nation is threatened mainly due to injunction on freedom of expression and thoughts beside many other issues.

This embarrassing situation of the province shows the state failure, whether it is provincial government, establishment or federal government. The issues of social sector are complex and cannot be understood only considering ‘education department’, ‘health department’ or any other department. These issues are knitted into domains of security, governance, corruption, negligence/ignorance, absence of innovation in service provision, which is required due to unique dynamics of the province, conflicts between different controlling agencies and even much beyond that.

Pakistan in 21st century with influx of 4th industrial revolution (4IR) cannot afford that largest and richest in natural resources region of the country remain in aforementioned situation. Above statistics clearly shows the failure of state (provincial or federal) in social sector in Balochistan. This is probably the last chance for the State to realize the issues and consider the development of the province more seriously, before it is too late. This document presents a road map along with some strategies for uplift of the social sector of Balochistan.

According Pakistan Standard of Living and Measurement Survey, low enrollment rates are mainly due to: (1) poverty, (2) parents don’t feel school is useful and (3) school too far away/ no school at all especially for girls. Considering these three main reasons the first is to have a targeted approach along with a holistic framework. A preliminary exploration reveals following regions may be targeted in initial phase because in these areas the education facility is almost absent:

The education department of Balochistan should enhanced its KPI and form a ‘Primary Education Commission (PEC)’, the funds allocated for new universities in Balochistan may be directed toward Primary Education Commission. The issues of education sector of Balochistan ranges from quantity to quality, and from supply of education to demand for education. PEC should take the responsibility to consider all these issues and should find the innovative solution for those complex problems. This commission should make it compulsory for university and college graduate to educate others whether to young or adult to improve the literacy rate.

Utilization of development budget should be on much efficient basis. The development budget should be allocated after careful and useful consideration of projects and utilized in an efficient manner. Education department’s KPI may be enhanced to ‘Primary Education Commission’ as mentioned above and funds for new universities should be utilized in primary education. Only leading universities in the province should continue their operation, the universities with inadequate faculty should be converted to community colleges. The students interested for higher education should be sent to foreign universities or leading national universities of the country with special package of HEC. The process should be strictly monitored and evaluated regularly from monitoring and evaluation department of Balochistan.

Training is most important component in poverty alleviation and to improve the well being of the people. Few following immediate steps may be taken:

Youth from Gwader should be trained from Karachi Shipyard & Engineering Works (KS&EW) for those traits required for port related services.

Preparedness plan need to be developed in collaboration with NAVTTC and Balochistan TVTA for CPEC and related SEZs.

NAVTTC can mobilize the resources from international partners to train the trainers. In context of Balochistan another important thing is to enhance the capacity of trainers, so that they can further depart those skills to local people.

The statistical information given in tables reveals that following health areas are important to be considered  as priority:

Initially, in first stage the Balochistan need to identify the priority areas. In disease control the mother and child health is very serious problem. Extremely high mortality rate is mainly due to unattended deliveries, risky pregnancies and food insecurity, which leads to mother and child health. A well-designed intervention, keeping in view the geography, cultural dynamics and innovative solutions are required to overcome this severe issue. Mobile units with trained LHWs along with sufficient supply of micro-nutrients can bring significant impact on mother and child health. This intervention doesn’t require a lot of investment and return is very high because it will also reduce the food insecurity if employed efficiently. These LHWs can be used for polio vaccine beside other routine programs of immunization and other vaccine providing international agencies. Legislation is also important to control the high risk fertility behavior. Sindh already passed a legislation on child marriages. Percentage of women who have had a live birth between age 15-19 are 10.4 % in rural Balochistan and 9.4% in Balochistan are highest in the region. Thus such legislation is need of time to be designed and implemented. Cancer hospital should be planned for Balochistan under the health sector investment of Pakistan Atomic Energy Commission and should be established on urgent basis.

Food insecurity requires long term solutions in the province. However, on emergency basis to save the lives of children and mothers, Balochistan Nutritional Program for Mothers and Children, which is operational only in Zhob, Killah Saifullah, Noshki, Panjgur, Kharan, Khlu and Sibi, should be operationalized in the rest of the province with much more efficiency.

To eradicate polio completely, the polio programs at border are most important. There is evidence of polio cases in Afghanistan, which is close to Pakistan. The human movement from boarder may cause spread of polio virus.  Strict legislation and implementation while crossing the border is required.

The health card may not work in the full extent as it may work in other regions of the country. The reason is government supports the health care facilities through their insurance companies only to those hospitals having certain level of facilities. In Balochistan, even a place like Lorali don’t qualify their criteria. Thus even if someone have a Health Card wouldn’t be able to get the service because service providing institutions are absent.

The institutional issues in health sector are not limited to Balochistan and in Balochistan situation is much worst than other provinces. If government of Balochistan only strengthen the Basic Health Units and Rural Health Units, the situation of medical care can be improved much significantly. Physicians are still lacking in far-flung areas, which may be motivated to serve in those areas with special pay packages. A side solution can be training of paramedic staff from best institutions of the country, so that they can provide their services in BHUs, RHUs and THUs.

These are only partial and limited suggestions but both provincial and federal government should declare a state of emergency for the province to resolve these very basic issues required for human existence.

Dr Asma Hyder Baloch is associate professor at Institute of Business Administration Karachi. Before joining IBA, she served as member social sector at Planning Commission, Islamabad. She is recipient of Fulbright J. William Award for International Understanding and did her Post Doctorate from University of Pennsylvania, USA.   She also served as faculty member at National University of Sciences and Technology for several years. She is a research affiliate at London School of Economics and Political Science, Sussex University UK and Carleton University, Canada.

Published in The Balochistan Point on December 27, 2018