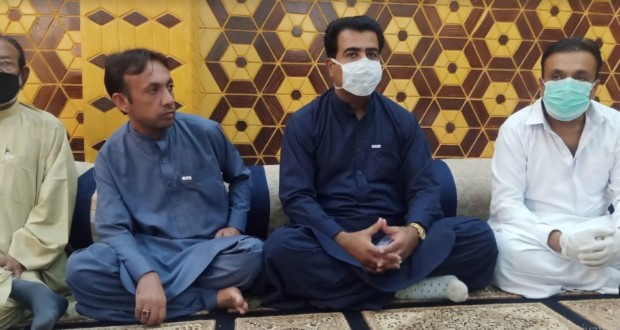 CHAGAI: Majority owners of the shops and houses located at London road in Dalbandin expressed apprehensions over the way master plan is being implemented in the city to reshape Dalbandin bazar. After a thorough discussion in a meeting held at Notezai house Sargesha, the former chairman district council of Chagai Mir Dawood Khan Notezai along with PTI leader Malik Amanullah Notezai and others addressed a press conference by announcing move for litigation if the main stake holders were not taken into confidence in connection with renovation of Dalbandin bazar under this project.

They said a demarcation process without consulting and considering the ownership of shops and houses was conducted which shows the non-seriousness of concerned authorities and the minster himself who also belongs to Dalbandin. “Everything is being kept secret while there is no proper plan to implement the said project in Dalbandin.

Mir Dawood Khan Notezai asked saying no one would be permitted to abolish the shops and houses for their vested interests and commission percentages. They warned if their concerns were not addressed they would not cooperate with government and resist every step in this regard, on the same time they made it clear that they were not against development. The government of Balochistan has initially approved 130 million rupees for the first phase of master plan for Dalbandin, the district headquarters of Chagai.

Published in The Balochistan Point on May 28, 2020