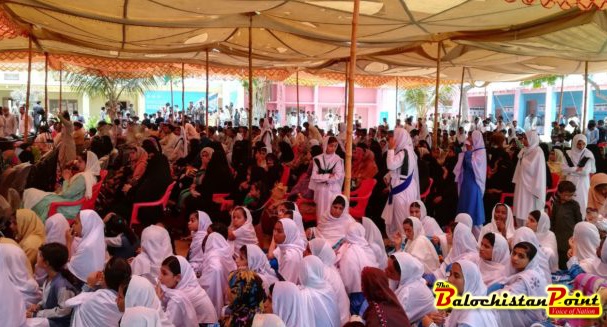 Gwadar: Gwadar’s largest one-day science festival for school-children kicked off on Saturday at Government Model High School, to ignite a spark for science and discovery among students in the region, and to promote better quality of learning available in government schools. The festival was organized by Deputy Commissioner Gwadar Dawood Ahmad Khilji, Education Department Gwadar, District Government, Bamsaar, Gwadar Association of Professionals, Hameed Honda, and Pakistan Alliance for Maths and Science.

The festival attracted a massive attendance of over 3500 students from more than 28 government and private schools of Gwadar district. Teachers, entrepreneurs, science specialists, government officials and politicians attended the festival where students exhibited more than 100 science models displaying their passion for science and technology, and introduced innovative concepts to the visitors.

Interactive displays and live experiments, some of which involved robotics, hydraulics, earthquake detectors, web and app development  and environment-based projects were conducted by the students and four science organisations from across Pakistan including Ejaad Tech, Stemmers, Pakistan Science Club and Sabaq. Two students had made a hydraulic bridge for a currently-proposed expressway in Gwadar to allow fishing boats to pass underneath it. Similarly, many students had chosen local issues and problems facing their communities in Gwadar to create their science models – some of them had done so on their own without having science teachers available in their schools. Chief Justice of Balochistan High Court Muhammad Noor Miskanzai also participated in the hands-on activity by Pakistan Science Club with children as a source of encouragement.

Nations have used maths and science to empower their citizens with higher incomes, and to help grow their economies. Maths and science education is not only integral to Pakistan’s prospects for economic growth and national security.

Today, Pakistan’s only deep-sea port city Gwadar is positioned to be an international trade hub and lead Pakistan’s ambitions to become an innovator in industrial, technical and strategic domains. Against this backdrop, the city offers an ideal opportunity to provide its students and youth with world-class quality maths and science education to allow them to support and spearhead the economic and technological transformation of the region in the near future.

Such quality-oriented interventions can help provide these children with an enabling environment to pursue and absorb high-quality learning, and push for an increased focus on improvements in maths and science learning inside classrooms, which could prove to be instrumental in Gwadar’s response to the opportunities available to the city, as well as to the province of Balochistan at-large.

Published in The Balochistan Point on April 30, 2018

2018-04-30
Editor
Previous: Letter: Save Our Youngsters
Next: PDS Balochistan meets Chairman Senate Mir. Saddique Sanjrani at his office in Islamabad