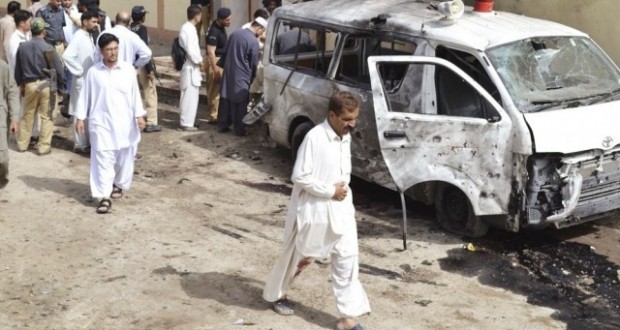 Quetta: At least 30 people, including three senior police officials have been killed in a  suspected suicide blast at the funeral of a slain police officer in Quetta and  more than 50 people injured. The injured were shifted to the Civil Hospital and the Combined Military Hospital.

Fifteen critically injured are being shifted to Karachi.

According to the detail, the bomb exploded outside a mosque where the funeral procession of station house officer Mohibullah was being held.

According to the Police sources “The bomb, which appeared to have been exploded by a suicide bomber, contained between eight to 10 kilograms of explosive material.”

The blast was the second targeted attack on Thursday on police personnel in the provincial capital, which has been under high security the entire day. SHO Mohibullah was shot dead by unknown gunmen earlier this morning in Killi Almo area while he was reportedly taking his family for Eid shopping.

Earlier in the day, an SHO City Mohib Ullah was killed, while his four children and driver sustained injuries, during a firing incident in Alamu Chowk, Quetta.

No militant group has claimed responsibility yet.

Published in The Balochistan Point on August 8, 2013

2013-08-08
admin
Previous: Task Force and the fate of Baloch missing persons
Next: Death of Innocence in Lyari