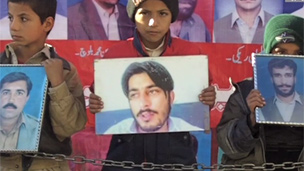 Task Force and the fate of Baloch missing persons

The illegal detention of people in Pakistan, allegedly by secret agencies collaborating with the security forces, has become an extremely unsettling matter. Due to lack of political will of the establishment, human rights organisations, the judiciary and media have failed to change the mindset of the responsible authorities for the recovery of missing persons. Regardless of any development in previous efforts for safe recovery of the enforced disappeared, the federal government has constituted a 19-member task force to form a national policy on missing persons and monitor the missing persons’ cases. Keeping in view the previous instances, the federal task force is being named merely for delaying the recovery cases and probe into them.

The task force is being headed by the Additional Secretary of the Ministry of Interior and comprises of home secretaries of the four provinces, Additional Attorney General, Member Commission of Inquiry on Enforced Disappearances, Additional IGs of the Special Branches of four provinces, Additional Chief Secretaries, representatives of intelligence agencies and officials of the Frontier Corps. The task force will form a national policy on the missing persons and monitor the cases. It will also work to gather the total number of missing persons and coordinate between institutions and availability of record in this regard. The task force will complete its recommendations and policy in one month and submit its draft to the Interior Minister. The draft will later be forwarded to Prime Minister Nawaz Sharif’s cabinet.

The configuration of the above mentioned officials itself makes the work of the task force dubious. In the presence of these authorities, the report and data gathering will be one-sided and the work may not be result-orientated because there is no one included in the task force who has any background of struggle against human rights abuses or missing persons, such as any prominent human rights defender, lawyer, journalist or a trusted human rights organisation.

The formation of this task force could have been appreciated if there had not been any failed experiences in the past. Unfortunately, having seen unproductive, unfocused committees and no development in judicial orders, one cannot trust this new task force. If we look at it in the perspective of Balochistan, this task force cannot gain the trust of the Baloch people because as compared to the Baloch missing persons, the number of enforced disappeared persons is not high in other provinces, thus making the situation very complicated in Balochistan. Apart from this, the dead bodies of the Baloch missing persons are continuously being dumped.

Since the first suo motu action the Supreme Court took for the cases of missing persons in 2006, no outstanding achievements have been seen to date, though after this move the number of cases in the Supreme Court increased and under the directions of the apex court, another commission was constituted in March 2011, headed by the former senior Supreme Court judge Justice Javed Iqbal. However, the above mentioned commission could not be supportive to the cases of missing persons, and was unable to reduce the anguish of the Baloch missing persons’ relatives. It should be noted that the Voice For Baloch Missing Persons (VFBMP) boycotted the hearing of the inquiry commission saying that it was an unauthorised commission and merely a waste of time.

The veteran journalist and Editor of Daily Times Rashed Rahman talking to the BBC said that the formation of this task force could be politics to gain political benefit because this issue has existed for years and the creator of this task force has aimed to show that he is being responsible. However, this could be effective if for the solution of this issue talks were held in advance with the establishment and army that this was not a good policy, particularly in Balochistan.

Chief Minister of Balochistan Dr Abdul Malik Baloch seems to be powerless on the subject of recovering missing persons. Despite that, he claimed that the recovery of missing persons was his main concern, but the current scenario is in opposition to his claims. The recent public report of the Baloch National Movement (BNM) says that since the appointment of the new chief minister from May 2013 to date, 85 dumped bodies were found and more than 200 Baloch had gone missing. However, the chief minster claims a record reduction in the disappearances of the Baloch and the recovery of bullet-riddled bodies.

For the conclusion, we take the comments of Chief Justice (CJ) Iftikhar Muhammad Chaudhry that the missing persons issue would not be resolved through the task force and that the government had to enact effective legislation. The CJ’s remarks, no doubt, reveal enough, illustrating not just the helplessness of the government but also how commands of the court are not being followed. The answer to this question only depends upon the will of the establishment, otherwise the government and judiciary may not be able to attain any success regarding the forcefully disappeared persons. The fate of the Baloch missing persons may remain the same and they regularly be turned into dead bodies. (Courtesy: Daily Times)