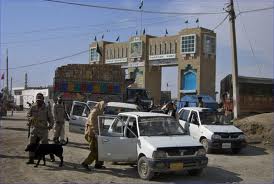 Chaman: At least five people were killed and ten injured in a suicide attack near the Bab-e-Dosti check post at the Chaman border crossing.

According to initial reports, the blast took place in Desh Mandi area, killing at least five people and injuring 10 others. The explosion took place when a man carrying a refrigerator on a push cart approached the gate from the Afghan side, the official said.

Sources in the Frontier Constabulary (FC) said that six injured were moved to Civil Hospital Chaman.

The injured were rushed to Chaman Civil Hospital. Following the attack, the Bab-e-Dosti checkpost was closed.

The Chaman crossing, is where NATO supplies landing in the port of Karachi cross into Afghanistan before reaching international troops deployed in Kandahar.

Last week, a suicide bomber had attacked a border crossing between Pakistan and Afghanistan on Friday, killing two people including a senior Afghan police commander near a customs gate.