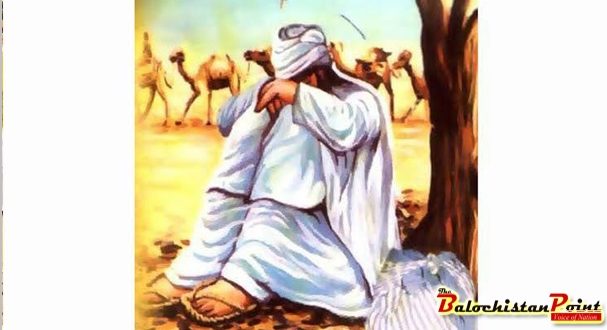 The epic story of Hammal and Mahganj

The Baloch history is full of secrets and adventures but unfortunately, with the lack of media and government’s attention, the issues and historical heritage still remains uncovered. The Baloch history is congested with exemplary incidents and events. The same like the Mughals’ rule in the Indian subcontinent, the Delhi sultanate or be it others. The Balochi love story of Hammal_o_Mahganj also remains one of the naked witness when it comes to the love. The love story of Hammal and Mahganj has passed generations to generations in the Baloch tribe.

It is evident that one can find many ports in the coast of Makran. One of the very old port is the port of Kalmat. The area was green and tidy. Therefore, it was in the limelight throughout Balochistan. In the old days,this area was ruled by a very vigorous, familiar and brave Baloch ruler named Jeehand. That time the Portuguese had invaded Amman establishing an empire from Zenjerbar to Balochistan and Amman. The Portuguese knew about the bravery of the ruler of Kalmat , Jeehand. AS a result,they never dared to attack port Kalmat. But , the Portuguese often attacked the boats coming and going from the port.

The ruler also had a son named Hammal. Hammal was a handsome man besides being a man of exemplary conducts. Many affluent people wanted their daughter’s be married with Hammal and many people wished him to be their son-in-law but in vain. Because Hammal never paid any heed to their talks and made himself busy with shooting and hunting. And the area was also covered with dense forest where Hammal with his friends often went for big games of hunting. Owing to this many poets often praised Hamaml in their poetry as Zehamjin ” swordsman/swordplayer ” and “Gorkush” Hunter/Nimrod”

Jeehand grew older and older day by day. Being an obedient lad, Hammal once called out his father that he was ready to marry a girl of his father “Jeehand’s” choice. He was then married to a very close relative, beautiful girl named Mahganj. The couple liked each other very much. With managing the family affairs,Hammal also continued hunting and shooting. The denizens of Kalmat were living comfortably. Luckly, Allah gave two sons to Hammal but happiness soon was haunted by a sad part of Hammal’s life when soon the Sardar of the tribe, Jeehand,became seriously ill and died.

Now all the responsibilities of the people were on Hammal and he became the Sardar of the tribe. Spontaneously, Hammal soon emerged to be a great ruler because of his efficiency and handled the affairs of the state and the land became prosperous and happy again. As being a respectful Sardar and the chieftain of a familiar and successful tribe, he didn’t stop hunting and shooting and setting off for brief excursions of boating. As usual, one day, Hammal and his friends embarked a journey to the sea by taking the requisite items of eating and so on. They had not gone too far when the brief excursion turned into a long voyage while they were hit by a sea storm. Consequently, they lost their way home. They drifted and wandered around the sea for a week. And on the seventh day, they reached the coast but as they were landing, the Portuguese attacked them the coast was of Amman where Portuguese had set up an establishment.

The fight between Baloch and Portuguese started. During the fight one of those boats came near Hammal’s boat. As a result, Hammal’s people jumped into the water because of being disarmed, leaving Hammal behind. But surprisingly, Hammal-e-Jeehand didn’t stop fighting the pirates. He killed many of them but as being alone and weaponless, the Portuguese kept Hammal as a prisoner instead of killing him pondering their Sardar would reward them. Therefore, Hammal was taken before the Sardar of the portuguese tribe. Sadly, Hammal was too depressed to witness his friends leaving and deserting him alone. He composed a poem addressing the clouds to take a message to his beloved mother and his loved wife Mahganj that he had been kept as a prisoner by the Portuguese and that he has been left alone by his comrades.

He was then taken before the Portuguese chief who was so pleased and inspired by his enchanting beauty and questioned why and from where he was caught.

They told the Sardar all the story on the way and told that it was better not to kill a brave and a handsome man. The chief talked to Hammal for a while and then he sent Hammal to the prison. After somedays or two, the Portuguese Sardar called him to correct his name and address. Consequently, Hammal narrated whole the story and that he was also a sardar of his Baloch tribe. Therefore, seeing his bravery and courage, the chief asked Hammal to be an officer of the Portuguese Army and that he could marry a Portuguese girl of his choice. But being a Baloch, he refused owing to the perquisite, he would have to embrace their religion and never return back to his land. Hammal said that he would never ever accept their religion, even at the cost of his life.

Listening to Hammal’s refusal ,the chief asked the soldiers to put Hammal behind the bars. The evil Sardar also had a daughter who was present on the day with the father when Hammal was before the Sardar. She liked Hammal in the first sight and when she heard that hammal was sentenced to the jail, she bribed the guards and took food along with her for Hammal. Witnessing her,Hammal enquired why she had brought food for him and who she was. She said that she was the daughter of the Sardar and that she liked him and wanted to marry him. Hammal refused the proposal and didn’t accept the food she had brought too. The wicked girl was so much enraged that she warned Hammal to take the revenge.

While in Kalmat,Hammal’s mother and wife wept day and night for Hammal’s disappearance. And went to a fortuneteller to predict the future and condition of Hammal. The fortuneteller lamented that Hammal had reached a place from where he would never return and he was in a prison with his hands and feet bound. They wept bitterly and prayed for Hammal’s safe return.

While,after a couple of days, Hammal was again called out before the Sardar and said to him that he was again dispensed a chance to think. Moreover, Sardar’s daughter was sitting also there. She interrupted that Hammal had offended her and that Hammal had spoken against their religion and said that it was an act of blasphemy. She said that Hammal should be killed otherwise, he would come again someday with his army to conquer the establishment which Portuguese had set.

Hammal, being a Baloch remained faithful to his family and nation. Hearing this, the sardar was very much angry that he ordered his men to kill Hammal. At the same moment, Hammal-e-Jeehand addressed the wind to tell his family and people. He also send some words through somebody to tell his wife to marry another man and tell his mother that he loved him till his last breath and has sacrificed his life like a brave, vigorous and greathearted Baloch.

He was indeed a brave person; for he didn’t bow down the Portuguese despite being imprisoned and bore all the atrocities of the wicked and evil Portuguese army. Seeing the bravery of the legend, the first Balochi film in the history of Baloch was casted which was “Hammal O Mahganj” produced by Anwar Iqbal which was released in 1976. However, it didn’t make to the cinemas considering it against the Balochi culture.

This writer is a student based in Turbat.