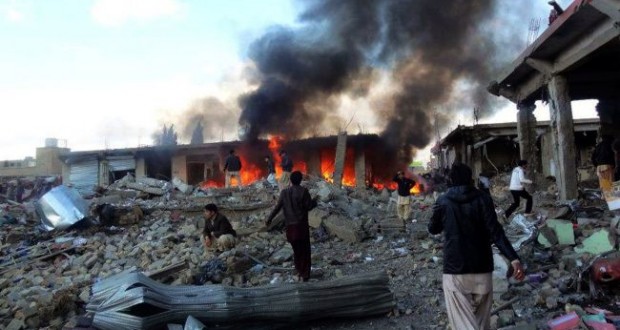 At least 23 people have died and several wounded in a suicide attack in Taftan, Balochistan on Sunday. These were not ordinary people. They are paying the price for being Shias and for performing undeterred their religious rites for years now. It is not the first time that the Iran-Pakistan highway has been used to kill Shia pilgrims without, of course, stirring the Balochistan administration to take effective action against the culprits. So much so, even the known orchestrators of Shia killings such as the Lashkar-e-Jhangvi (LeJ) leader Malik Ishaq has been released for lack of evidence on several occasions, despite the LeJ’s openly accepting responsibility for Shia killings. Some 300 Shia pilgrims were returning from Iran and had stayed in two different hotels in Taftan. Five suicide bombers had been dispatched on the mission. Two bombers detonated themselves at the gates of the hotels while the rest went inside and sprayed bullets on the victims. Most of the people were killed in one hotel where 197 pilgrims were staying. The terrorists were armed with sophisticated weapons and hand grenades. Security forces, including the Frontier Corps and Levies, reached the spot immediately and launched an operation against the terrorists that lasted several hours. A group called Jaish-e-Islam has claimed responsibility for the attack.

On January 21, 2014, an incident of a similar nature occurred in the Mastung district of Balochistan when a bus carrying Shia pilgrims back from Iran was stormed, resulting in the death of 22 people while injuring several others. LeJ took responsibility for that attack too, and not until the Balochistan government promised the Hazara Shia community to take stern action against the LeJ did the relatives of the victims agree to the burial of their loved ones. At that time, the Chief Minister Balochistan Dr Abdul Malik Baloch had also announced to launch a ferry service to Iran to make the journey safe. Several flights from Quetta to Iran and from Karachi to Iran have been initiated as well. However, many people cannot afford the air fare and are therefore unable to avoid the deadly Taftan highway. Therefore it is business as usual. The government made no attempt to make the journey safer for the pilgrims with or without the ferry. The assassins of the Shia community generally are at large while the killing of the Shias continues unabated. Nothing has changed. What is changing is the religious landscape of the country, which is fast becoming an insidious field strewn with corpses of all those who do not belong to the main denomination of Islam in Pakistan. How many more years will the government spend in collecting the wreckage of its own negligence? There is hardly any valour in launching operations once the damage has been done. (Courtesy : Daily Times)

Republished in The Balochistan Point on June 10, 2014