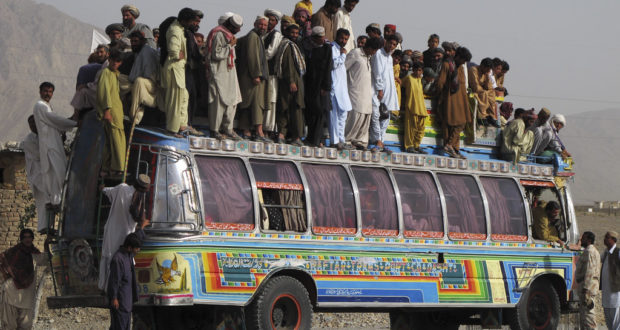 The laden buses of Panjgur bother the passengers

One of the main issues that Panjgur confronts is the extremely overloaded buses which take them to the roughly connected cities such as Quetta and Karachi via the single carriage route.

The accountable authority and especially the district administration after the tragic and ruinous mishap of burning a passenger bus adjacent at Bela along with nearly travelers strictly initiated a crackdown to halt all the transport owners in a case of further overloading the buses. Especially with unlawfully smuggled diesel from Islamic Republic of Iran.

However later on as the egg got onto the frypan it has slowly come into a smooth re-initiation of transporting the trafficked goods and diesel by means which should be only used for the public conveyance.

Abdul Haleem, an Engineering student and a passenger while travelling to Quetta has been asked about the long-lasting issue of the laden buses. In reply he stated, “The situations with the passenger’s buses are very serious as the entire Panjgur is senseless, no one stabs to halt them playing with the precious lives and all of the so called public conveyance providing companies which have a route from Panjgur to Quetta are seriously making funs of the people futures”.

“Numerous of accidents occurred yet to now taking the several people’s lives. Several buses burnt blatantly and many times it has been aired federally and provincially to avoid the public conveyance carrying extra loads but here nothing works as for the said statement because until the system of paying offs to the installed outposts don’t get stopped,” an elder citizen and a teacher by profession Hakeem Baloch replied.

When a question regarding this injustice to public was asked to the transporters often in exception of a rude reply we received is to mind our own business and the concerned authority is responsible to ask them such questions.

It has been attempted to approach the district commissioner and taking his esteemed opinion and details of the actions taken over this callous unfairness to the public nonetheless as usual it turned ineffective just because of dearth of receiving an appointment.

“We take different things to Quetta. It relates to the senders as our dealings and business differ from trader to trader but frequently the banned imports such as oil, diesels, carpets, dates and dried fruits etc. which are expensive transported to various places. The public and drivers all survives are on a verge to perish anytime as knowing the fact we have no such a tongue to roll. This defends upon these transports and vehicles possessors what to how to manage it protecting hundreds of lives”. On condition of anonymity a driver of a passenger bus answered.

“These vehicle (while pointing a finger towards the parked buses at the terminal in Panjgur) for public conveyance travel in two shifts. At the morning service vehicles carry the goods but in a smaller extent as in association of the evening shift’s.  But they carry an inexplicable quantity which only the brokers know. Both of the times shifts are dangerously playing with the lives of the people as we lack of true administrators who would be able to take prompt actions against any such injustice being penetrated upon public”, Mohammad Shafi, a social worker scolded upon the absurd system.

Published in The Balochistan Point on August 14, 2019

2019-08-14
admin
Previous: Scandinavian states must prevent war in S.Asia: AJK President
Next: Pakistan has the second-highest number of out-of-school children in the world.