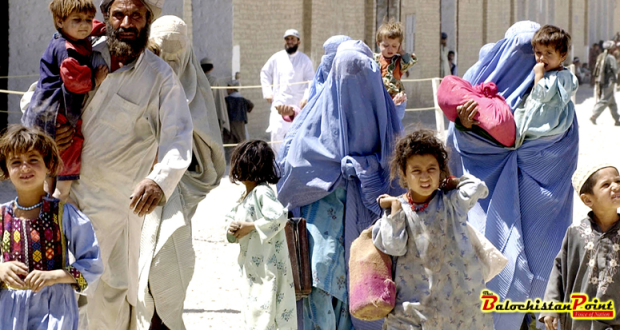 The lingering crisis of Afghan refugees in Balochistan

Balochistan, the largest province of Pakistan with the smallest number of people, is a home to diverse communities. The demographic composition of the province is highly polarized ethnically as well as linguistically. The majority of the province’s population is Baloch seconded by ethnic Pakhtoons. With area of 347190 kilometers, the province constitutes almost 43.6% of the total land mass of Pakistan. The richest in resources but the poorest in terms of socio-economic developments, the province of Balochistan continues to be haunted by countless imbroglios ranging from insurgency, political instability and sectarian violence to poor infrastructure, low literacy, precarious healthcare and rampant corruption. In this context, the overwhelming burden of Afghan immigrants is one of the many problems currently facing Balochistan. In the beginning, a few indigenous Pashtoon activists supported the influx of Afghan refugees seeking asylum in Balochistan. They found their arrival as a good omen which augmented their number thereby overnight turning them into a majority ethnic group. They also motivated them to buy property in Baloch majority areas. However, with the passage of time, the same native Pashtoons are filing complaints against the very immigrants whom they warmly welcomed as bloodline brethren. In the face of growing Baloch nationalist activites in Balochistan the the state agencies also pursued a systematic policy of turning the ethnic Baloch into minority in their own ancestral soil.

With the state patronage, these Afghan immigrants easily acquired Pakistan’s National Identity Cards in Balochistan. With the acquisition of CNICs, they soon began to expand their monopoly over the already meager perks and privileges hitherto enjoyed by the locals. They used black money to get jobs and occupied key govt. positions. A senior official tasked with investigating 16,000 applicants for Pakistani CNICs revealed that the top Pakhtunkhwa Mili Awami Party leaders pressurized him to rubber stamp the applications. At the risk of death threats, the official defied to comply. The PKMAP leadership blatantly plays a dual policy of publicly denouncing the few genuine cases exposed by NADRA while at the same time pressurizing the NADRA authorities to issue CNICs to these illegal land grabbers.  The increasing number of Afghan asylum seekers in Balochistan has led to an unprecedented demographic imbalance in the province thereby outnumbering the aboriginal sons of the Baloch soil. Frankly speaking, the Pashtoons and Baloch have had close cultural and historical links with each other and have been living together peacefully. But this brotherly bond is deteriorating recently due to nefarious policies of PKMAP leadership. They are exploiting the ongoing situation and offer nothing helpful to these homeless refugees. Against this background it is not surprising that the nationalist leaders tend to support Awamy National Party rather than PKMAP.

The business of issuing illegal ID cards to the Afghan refugees has been going on for nearly three decades. But the recent years have seen a tremendous increase in this activity. In one such incident NAB arrested two Assistant Directors of NADRA who were involved in the blatant act of issuing illegal Pakistani ID cards in return for exorbitant bribe. In many important districts of Balochistan in particular in Quetta, these immigrants constitute the major chunk of the population.  Roughly two million Afghan refugees are residing in different parts of Balochistan including Quetta, Nushki, Sibi, and contiguous districts. The fact of the matter is that majority of them possess Pakistani ID cards. Moreover, last year in the face of stiff opposition from PKMAP the officers blocked 45,000 illegal ID cards of Afghan immigrants from Quetta and Qilla Abdullah only. In another instance federal Interior Minister also confirmed the blockage of 90,000 ID cards for similar reasons.

In addition, the continued presence of Afghan refugees in Balochistan is hurting the culture & already crippling economy of the province. The government of Balochistan can ill afford to provide adequate healthcare, education and employment to its own youth, how come it would extend such facilities to these refugees. Against this background, their presence in Balochistan has serious economic implications for it. The incumbent provincial govt. of Pml’n in Balochistan under Nawab Sanaullah Zehri has also provided only a lip service to address this issue. Many Afghans hold prominent govt. positions and some of them even competed for provincial seats in the last General Elections. Many of them are elected councilors in the northern vicinities of the province.

Recently, under the Afghanistan’s National Peace and Development Framework, the government of Afghanistan has forged a high-level Displacement and Return Executive Committee (DiREC) to prioritize assistance, repatriation and reintegration prospects of internally displaced people. Pakistan for its part adopted a national strategy for managing the Afghan refugees living in the country. Given the recent developments more practical steps should be taken to ensure comprehensive, predictable and sustained resolution of the issue.

Published in The Balochistan Point on March 13, 2017