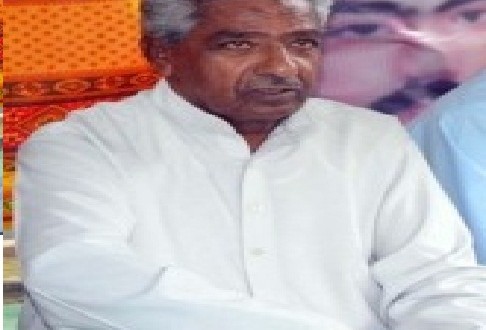 Mama Qadeer Baloch, the leader of the recent 750-kilometer long

march from Quetta to Karachi, is not a prominent politician or a leading cleric. He still managed to draw an impressive crowed in a seminar held at the Karachi Press Club on Tuesday, December 10, which was the International Human Rights Day.

Mama Qadeer is the father of late Jalil Rekhi, the secretary information of the Baloch Republican Party (B.R.P.) who disappeared in Balochistan and was found dead two years later. Now, the seventy-year old former banker has devoted his entire life to the cause of the missing Baloch persons. He insists that he would struggle until the last missing Baloch returns home. The conference organized at the Karachi Press Club was attended by hundreds of  members of the civil society and the media, including Pakistan’s acclaimed novelist Mohammad Hanif.

While peacefully marching from Quetta to Karachi, Mama Qadeer says he received death threats from the intelligence agencies and the anti-Baloch death squads connected to security forces. Even the Pakistani media did not cover the long march and tried hard to keep the whole world in dark about its motives.

Mama Qadeer did not give up his struggle despite deadly threats and arrogant rejection from the Pakistani media. Not only he and his colleagues, all of whom are the relatives of the disappeared people, managed to arrive in Karachi  after 28 days of walking but they also made it impossible for the Pakistani media to completely snub their increasing and spreading impact.  On Tuesday, human rights activists and common citizens traveled from cities other than Karachi to attend the seminar in Karachi about the missing persons. Mama Qadeer’s movement is steadily becoming too important to be ignored.

Mama Qadeer and fellow protesters have now decided to embark upon another long march from Karachi to Islamabad which is twice as long as the journey from Quetta to Karachi.

“The issue of the missing persons has reached such an alarming level,” Mama Qadeer told the audience at the Karachi seminar, “everyone in Balochistan now fears being kidnapped, tortured and killed someday.”

Senior Pashtun journalist Abdul Hayee Kakar, while writing in liberal Urdu publication Enkaar about Mama Qadeer’s struggle, had rightly argued that Islamabad may be too far for him but not the mountains of Balochistan which consistently provide him an option to join the Baloch armed groups to avenge the killing of his son.

What Mama Qadeer and his fellow female and children marchers are doing is extremely courageous although it is physically painful. Like so many other Balochs, they do have an option to join the armed insurgency as a common feature of the Baloch tribal traditions to take revenge. But, they have chosen the path of peaceful, democratic struggle. We should not take their commitment to peaceful democratic struggle for granted.

It is indeed a shame that the foreign governments, the international media and headquarters of international human rights groups have not issued any statements of sympathy for the Baloch long marchers. We urge the international diplomatic missions in Islamabad to inform and educate their respective governments about this historic, peaceful struggle for justice in a country that is known across the globe as a sponsor as well as a victim of terrorism.

Mama Qadeer is a hero of human rights and peaceful democratic struggle. Foreign governments and international media should not remain silent spectators. It is the time they recognized this great hero of our time who has held the most spectacular democratic long march in the history of Pakistan. The country has never seen such a classic commitment to non-violent struggle at a time when the government and the nationalists are engaged in a full-fledged military confrontation. There are few heroes like Mama Qadeer left in Pakistan and it is the time to support them.