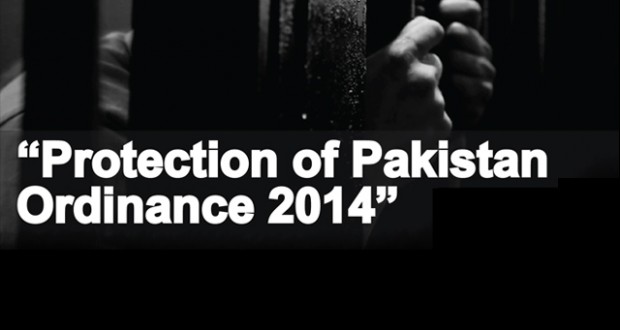 On February 7, 2014, National Assembly of Pakistan approved a resolution of Pakistan Protection Ordinance with the glaring approval of The President Manmoon Hussain.  Pakistan Protection Ordinance aims to sum up all the peace-terminating elements, as the foes of the country. Furthermore, The PPO document also brings the protection of its masses’ lives into the consideration of the State as the top priority, pragmatically as well. In line with the new Ordinance, “Security of life, property and dignified living of our own people shall be the prime goal for all functionaries of the state”. Moreover, “Writ of the state shall be restored with full might of the law; those to pursue fruit of terror and fear, regardless of nationality, color, creed or religion shall be treated as enemy aliens and dealt with strictly without any compunction” the ordinance stated.

In addition, Staggering is the repercussion of the recently issued resolution, consequently, The Defense of Human Rights strongly condemns the recently promulgated Ordinance by Manmoon Hussain firstly, by the moniker of Protection of Pakistan Ordinance on 31st October 2013 and later on another by the name of Protection of Pakistan (Amendment) Ordinance on 22nd January 2014. According to a recent Islamabad-based report, ‘The President stamped his approval following advice from the Prime Minister. This is a separate ordinance which promises to bring in new legislation to improve the country’s precarious security situation and strengthen the Anti-Terrorism (Amendment) Ordinance 2013’.

The Pakistan Protection Ordinance is all concerned with coming up with the good maintenance of the peace and tranquility in the country and the government’s pledge to increasing security of life itself apparently seems to be an easily-said-than-done kind of a bilateral pledge for a new vista of the birth of peace in the country, inasmuch as since the independence of rather a democratic Pakistan after 14th August 1947, there has been no long-lived stability of peace in the country till the present day.

According to the PPO Document, the following are its most substantial clauses:

1. Every possible state instrument and resource will be deployed to defeat and frustrate all or any nefarious attempt to create disorder.

2. The cancer of syndicated crime, in all its forms and manifestations, shall be responded by proportionate use of state force under the law.

3. Separate police stations will be designated for professional and expeditious investigations of specified crime, prosecuted through federal Prosecutors.

4. Special Federal Courts shall be designated to render inexpensive justice with promptitude as mandated by Article 37.

5. Joint investigation teams shall be constituted to conduct investigations by security agencies and police in all heinous crimes committed in areas where civil armed forces are invited to aid civil power.

6. Those involved in syndicated crime shall be relocated to other parts of the country for transparency and fair trial.

7. Judicious and effective use of preventive detentions shall be made in cases involving serious crimes by criminal gangs and mafias.

8. Special jails shall be designated to detain hardened criminals and the minimum quantum of punishments is now re-determined at ten years.

9. The state will not allow Afghan immigrants or other foreign nationals to be used for terrorist purposes.

Bad to abysmal, provided the fact that this issued protection ordinance of Pakistan merely aims at bringing positive transformations in the shape of strengthening the security of masses’ lives and specifically, sustaining the peace in whole over the country, still The Human rights Watch is vehemently criticizing the recently issued protection of Pakistan Ordinance and it meticulously said that “The law threatens the basic rights and freedoms in violation of Pakistan’s international legal obligations. The proposed law violates fundamental rights to freedom of speech, privacy and peaceful assembly, and due process protections embodied in the International Covenant on Civil and Political Rights (ICCPR), which Pakistan ratified in 2010. In its current form, the law could be used to suppress peaceful political opposition and criticism of government policy” said The Human Rights Watch. Moreover, The Institute for social justice declares that “In 2014, the Ordinance 2013 was further amended to include more stringent provisions to deal with acts of terrorism but many of its provisions are against fundamental rights of innocent women, children and foreigners in Pakistan”.

In the introductory section of the document of Pakistan Protection Ordinance it mentions that “The legislation is totally against the provisions of the Constitution of Pakistan and major internationally accepted legal instruments and brutally undermines the fundamental rights of the citizens”. In a broader sense, “The PPO grants extensive arrest and detention powers to security agencies in the context of military- and terrorism- related operations which somehow give the drift of the unfortunate insecurity of the innocent masses’ lives during an operation” mentioned The Global Legal Monitor.

If we take the example of N.A.T.O which is an international organization in the United States that carries out operations on Anti-government groups. This step is totally understood in terms of eliminating the anti-government parties but, on the other hand, we can’t deny the fact that during military or air force operations many of the innocent people can also fell a victim to many mishaps and demise after any targeted bombardment of N.A.T.O specific crafts.

On the other hand, in order to maintain and sustain peace in the hook and cranny of the State, according to another recent article regarding the Section 3 of the PPO. “It gives complete powers to armed and civil forces to use necessary force to prevent the occurrence of offences which includes destruction of or attack on communication and interaction lines, gird stations, power generating and distributing systems, lines and poles; attacks on flight crew members; destruction of or attack on gas or oil pipelines and liquid or natural gas facilities and other means of their transport including tankers; destruction of or attack on of national defense materials, premises, utilities, and installations including check posts, prisons and other fixtures;  crimes against computers including cybercrimes, internet offenses and other offences related to information technology etc wrecking, disrupting or attacking mass transport systems including trains, buses, cars and their stations and ports, etc.”.

On the other side of the coin, Baluchistan is Pakistan’s most disturbed province in terms of peace and security of life, indeed, internationally Baluchistan is known as a sectarian terrorism hotbed and after the killing of Nawab Akber Bughti and seeing the State’s atrocities, the emergence of Baloch insurgency for an autonomous and independent state is on the rise. Certainly, given the abnormally dimensional circumstances and the existence of various anti-govt regimes at the current tumultuous juncture of the Province, The military operations are also disproportionately taking place in order to keep peace alive in the province but consequently, many innocent people are also kicking the bucket due to the unforeseen and unpredicted operations in the war-torn and barbarically injured province. Hugh! History is the evidence that during the insurgency of the Bengali separatists, same operations, killing and dumping of the masses’ was a routine military conduct of the State. Ultimately, which led to a free and autonomous Bangladesh as well as the same before-mentioned are taking place constantly in Baluchistan too. Optimistically, keeping in mind the prime goal of The Pakistan Protection Ordinance which surely is the security of its citizens’ lives, the troops are due to do their level best in order to live up to the obligation of the constitutionally issued ordinance to keep secure the lives of the innocent masses.

As Hamid Mir put it so correctly, “That the state must withdraw the troops from Baluchistan or should stop its barbaric operations, otherwise, Pakistan would give birth to a new and autonomous Bangladesh!